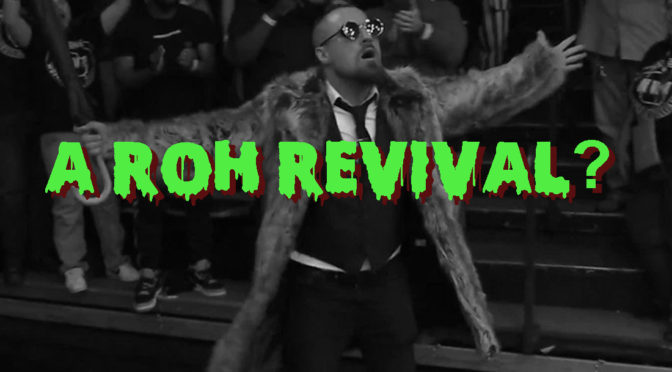 Ring of Honor isn’t what it once was and that’s through mismanagement but through some key moves, the brand has some buzz once again.

Ring of Honor is on more networks than ever before thanks to their Emperial like owners, Sinclair Broadcasting, buying up every little station left in the U.S. While their shows still aren’t on the same day and time; which is maddeningly stupid, there are now more eyes on them than ever before as well.

After a disastrous 2019 that saw them sell out Madison Square Garden, only to fall apart and lose a bulk of their fanbase by years end, the once-proud organization has made some key moves.

While the talent acquisition isn’t great still, they’re getting who they can get. Yet, it’s the name they didn’t lose that has fans hopeful. Marty Scurll was re-signed to massive deal and reportedly added to the creation of the company. Scurll is expected to have a huge input on the product going forward, a rumor that many fans are hoping to be true. The two-headed snake that is Bully Ray and Delirious is just not working anymore. Not that it ever did.

Scurll isn’t just the key to improving the creative, which is one of it’s most obvious weakness but he’s also the key for the product presentation. Getting the belt on Scurll improves optics and has fans excited about the direction for the first time since Jay Lethal won his first world title.

The possible re-cementing of the New Japan relationship is also key as NJPW quickly found themselves limited in American partners after they dismissed IMPACT Wrestling, and scoffed at anyone else. With their launch of the NJPW US brand this year, they’ll need some help and it looks like the talent exchange between ROH and NJPW is back on, to a  degree.

The addition of the National Wrestling Alliance to the ROH lineup of co-starring promotions also helped boost the viability of the brand once again. Nick Aldis and company may not be huge on their own, but merging two third-tier promotions would really help garner a lot of eyes and interest on their respective parties. Assuming it’s done well.

ROH isn’t out of the woods, as they still need to show the fanbase that they aren’t going to continue to make the same mistakes they’ve been plagued by for years. That said, they’re on the right path and 2020 could see them rebound nicely with Scurll as the new face of the brand.