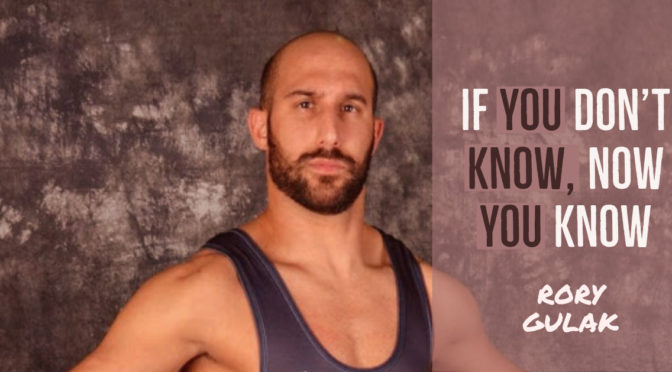 Accusations against indy star Rory Gulak have begun popping up on the internet about disturbing behavior and potential sex crimes.

Rory Gulak was accused by Maa Kheru on Twitter in December 2019 of containing and sharing child pornography with people. Kheru tweeted out on Dec. 19, 20

She then clarified on Jan. 5, 2020 that she was alluding to Rory Gulak in her first tweet.

She didn’t name Rory Gulak specifically until Jan. 5 of 2020, but it’s fair to say that Twitter right now isn’t the place to make unsupported claims with how volatile things are.

News later came to light via Mike Quackenbush, owner, founder and face of Chikara Pro Wrestling, where he stated that after an investigation they had removed Rory from their roster and as a trainer. Chikara is where both Rory and his brother Drew spent ample time, with both serving as trainers at some point.

Numerous sources have reported pro wrestler Rory Gulak, of Philadelphia, for a number of heinous acts, including, but not limited to, the alleged possession and viewing of child pornography.

Numerous sources have reported pro wrestler Rory Gulak, of Philadelphia, for a number of heinous acts, including, but not limited to, the alleged possession and viewing of child pornography.

For transparency’s sake, the next accusation comes from a woman who was actively engaging in a digital experience of sorts with Rory Gulak. She claims to only have kept continuing with him because she wanted to see how far he’d go in the conversation and if he’d reveal anything pertinent to take to the police. She also claims to have sent the information about the encounter to a local news outlet but nothing came of it.

She goes by @TheElleHell on Twitter and posted screenshots of the entire exchange. Some of the content in the screenshots include nudity, so those won’t be posted, but she did post a screenshot that she claims involved a hypothetical son being brought up in conversation. 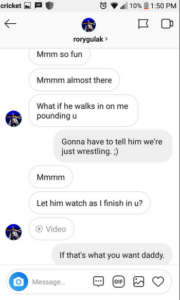 The problem is that there are noticeable chunks of her responses missing, making some of this a guessing game on the details of what prompted some replies. Gulak, however, does go out of his way to mention if she’s ever watched bestiality; 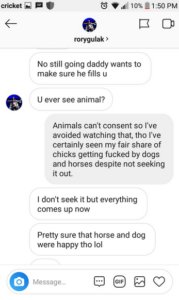 There’s also an entire slew of comments on Twitter that describe predatory behavior that while not illegal, may form some opinions on Gulak’s behavior.

As of right now, neither Rory or his brother have commented on the matter.