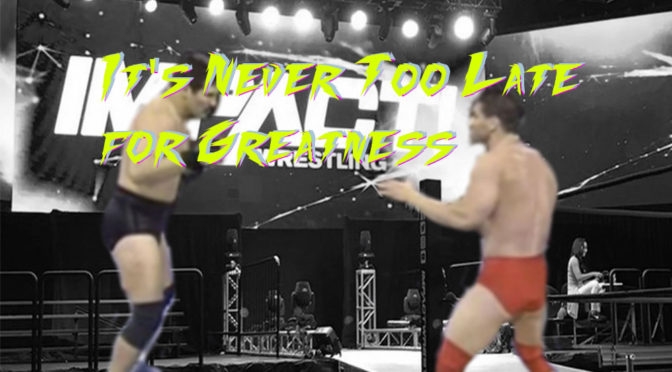 Why though? Why am I suggesting this bout take place in the next few months?  Well, let me tell you about a long told rumor that I’ve always heard.  It goes something like this; Ken Shamrock was supposed to face Dan Severn for the NWA Worlds Championship in 2002 at the inaugural event.

Severn, at the time, was at the end of his 2nd reign as champion.  The 5th all time longest-reigning-champion was 80 days into his second reign when IMPACT (then NWA-TNA) formed.  Severn was asked about appearing and according to news outlets at the time declined to appear when IMPACT couldn’t come to terms on a deal.

So the NWA stripped him of his title.

The belt as we all know by now, was then put up in a 20-man battle royal that saw Severn’s longtime UFC rival Ken Shamrock win the title.  The idea that NWA-TNA/IMPACT would build up to a pay per view bout between the two for the title is absolutely something that they would’ve done back then.  It may of even worked.  Severn still had some notoriety in the fighting game, and Shamrock was still active the MMA scene as well.

From all perspectives, it was a bout that needed to happen.  It certainly would’ve provided far more depth on the card if they didn’t have to put their biggest names in the battle royal.  So maybe the promotion could’ve gotten off on a better foot and gone forward with more fan support.

Though, that seems unlikely at best.

Yet, here we are, nearing the 10th month of 2019.  Seventeen years plus years after that fateful June night in 2002, and I’m saying without any irony that it’s time to do this bout.

I’m not expecting any sort of miracles or all time great performances from this outing.  I don’t think it’ll be a five-star classic or even the best match on the card.  It will be a moment though.  To see arguably the two greatest early-UFC fighters of all time going toe-to-toe one more time is something worth selling tickets to.

It could be in a cage, maybe bring back Lockdown or even in a tag team match of sorts where the two vets.  It shouldn’t be a main event one on one encounter at a pay per view, but a tag match with Severn and Moose taking on Shamrock and Cage? Or Shamrock and Moose vs. Cage and Severn?  Do it on the IMPACTPlus app, and stream it?

I’d tune in for that.