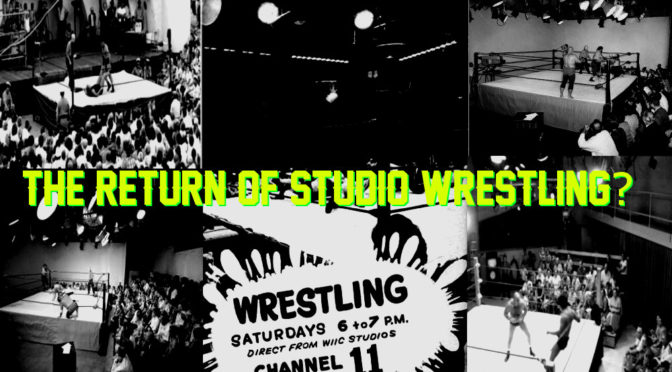 The NWA announced they’d be taping pilots for their new studio show on September 30th and October 1st in Atlanta, Georgia.  A curious move for many, as studio wrestling was long seen as a dead gimmick in the world of pro wrestling.  Why mass-tape shows back to back with one audience when you could tour around the country with fresh eyes seeing your product?

It was done in a time and place where regional wrestling was still big business.  Most wrestling was done at local news stations, usually in an unused space or warehouse that was converted for the weekend.  It was successful due to the regional reach of local t.v. stations.  Before the rise of the cable industry in the 80’s, this was just how it was done.

The biggest company to engage in studio wrestling is obviously World Championship Wrestling, also known as Jim Crockett Promotions.  The show aired weekly on Saturday’s at 8:05 and continued all the way through the advent of weeknight cable wrestling in the early 90’s.  WCW’s Saturday Night program as it was known would be taped form the Disney Studios for a while, upping the production value but reducing the overall revenue of a live gate.

The upside was far lower production costs.  Instead of going to a new venue every week or so to film, you keep everything in place.  This was a strategy WCW used to great effect until they regained enough traction to begin touring again for regular T.V. with their flagship series known as Nitro.

IMPACT Wrestling also ran a studio show for a time.  Airing out of the Tennessee State Fairgrounds, also known as the Asylum, from 2002 to 2004. They’d keep their studio style show but go to Orlando and use the sound stages of Universal Studios.

Now a days IMPACT Wrestling’s flagship show IMPACT! is still shot as a studio show (in bulk) but it tours around North America now, shooting in smaller venues.

So why is The NWA running shows with the intention of going backwards in time with how wrestling was presented?  Well, cost more than likely.  Running out of Atlanta can’t be cheap, but considering that the NWA has only had two official shows since Billy Corgan bought the brand several years ago, it seems as though the NWA will have a tight budget.

If the NWA can land on a network and be presented for an hour a week, plus via YouTube on a daily (or regular basis), then the NWA can start to rebuild their once great empire before WCW split from them back in 1991.   The idea seems a bit passe but there might be something to this idea.

Wrestling has been a touring brand televised brand for thirty-some-odd years.  We’ve seen it one way years.  The idea of offering a studio show is an old idea, but could be a modern stroke of genius.  For brands like the NWA, it’s a cost cutting measure to get them on television.  For other brands however, it might be the best way to bring in a study source of income for their companies while reducing costs.

WCW started to truly turn the financial corner when they aired both Monday Night Nitro and Saturday Night in the same week.  Nitro would be the big show with the big bouts, while Saturday Night would feature lesser known matches and a specialty main event bout usually.  The Saturday Night show though would begin to be filmed on the road, usually before Nitro or their sister show, Thunder.

It marked the end of an era but the show persisted as a way to showcase new talent until it was eventually cancelled itself in August of 2000, after being moved to the mornings. From there no promotion ran a studio and touring show consistently.   Even IMPACT! would be on the road several times a year, eventually leaving completely in 2013 before returning to their Universal sound stage in late 2014.

Rumors are abound that IMPACT and new upstart All Elite Wrestling are looking to copy the NWA’s approach and add second shows to their lineups.  The IMPACT show is almost inevitable, as a pilot was already shot called Cali Combat and was met with a great amount of praise backstage by officials.  With their new T.V. home in need of content, a secondary show seems almost guaranteed at this point.  They clearly have a great sound stage in Los Angeles and plenty of years of doing a studio show.

With AEW, this seems out of the blew.  The brand hasn’t even debuted yet on TNT, and with inconsistent viewership for their major pay per views, it’ll be interesting to see what the viability of their Dynamite program really is.  Yes, despite the unknown commodity in AEW’s Dynamite, TNT General Manager Brett Weitz is already looking at adding the elusive studio show.  While talking to The Wrap, Weitz was quoted as saying;

We are talking about it.  I don’t know if you’ve met Tony Khan, but he’s not short of ideas — or passion. So there is a world where we’re thinking about ‘Where does something like that live?’ Knowing full well that within the WarnerMedia ecosystem we have B/R Live, we’ve got all these different components at our disposal. The more content for these fans the better, and we would love to figure out what something like that looks like.

It may not happen on October 2, which is what we’re all kind of gunning towards, but it wouldn’t surprise me if it was something that [launched] shortly thereafter. We’re thinking about it for sure.

AEW has already ruled out doing live events for the time being, focusing mostly on their television and pay per view content.  With the lack of extra revenue streams, diving into a second show before the first is even on the air isn’t that dynamic of a thought.  You have to monetize the content somehow, right?

With wrestlers getting paid more than they’ve been in decades, and the rising cost of travel expenses, this makes sense that newer and smaller promotions are looking at circumventing some of the deeper expenses.  The studio shows should be unique in their own right and if they focused on newer talent, developmental matches and a spotlight on the lesser seen main-stars, then the studio shows should do well across the board.

Who would of thought that a nearly fifty year old idea would be seen as cutting edge and trendy in 2019.