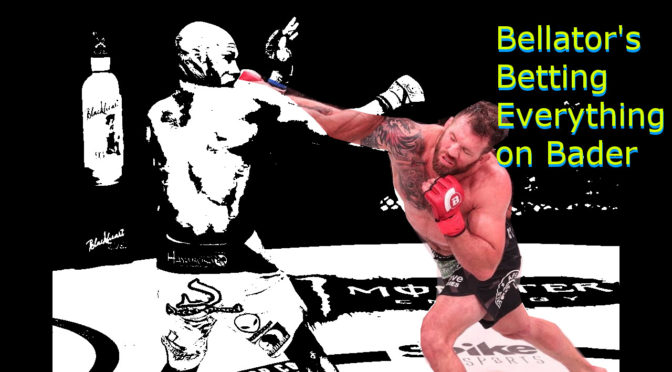 We live in this awful time in the MMA world, and in society itself, where name brand = quality.  That’s simply not true.  With all due respect to the likes of Beyone, do you really think she’s the greatest female musician in the world?  There are some 6-odd-billion people on this world, and millions of whom who make music.  I bet someone out there that has better pipes and (easily) better song writing talents.

But you don’t know her name, you know Beyone’s.  Which is the point. Name brand isn’t talent, it’s marketability.  It’s what you can sell.  Hell, go watch any video about the current crop of champions in the UFC.  Where did most of them come from?  Strikeforce.  Who ran Strikeforce?

If you don’t think Coker can find top talent, you’re kidding yourself.   The problem with today’s MMA landscape is that most people covering the sport only got into it after the likes of WEC and PRIDE closed down. The idea that the UFC doesn’t have the best fighters is laughable, after all money talks and talent walks.  Why would the UFC pass up on great fighters in today’s climate?

Because Dana White has a type, and those types aren’t always the best, just the most “exciting”.  Keep in mind White actively believes that Fedor Emelianenko isn’t that great because “who did he beat”, just a bunch of future UFC Champions, no bid deal.

Plenty of talent get past Dana White.  In fact I’d hazard to assume White is actively bad at his job.  He said Nate Diaz wasn’t a needle mover.  This was said about a year and a half before he and Connor McGregor broke 1.5 million buys.

It took White five years to admit that Nate was a draw.  White isn’t that intelligent.  Clearly, it’s not hard to look at the top talent in another person’ promotion and go “Oh, he’s good.”

So if you expect to get honest criticism from a man who has YouTube video after YouTube video of his “top ten lies”, good luck.  Why do I bring up Dana White though? Seem’s odd, no?

Well it’s because it’s White’s influence and market dominance that has lead many MMA journalists and “experts” to decree that the “top fighters in MMA fight in the UFC”.  Except, that’s not true.

At least it’s not a fact.  It’s an opinion.  Look at Demetrius Johnson and Eddie Alvarez.  They didn’t fair too well in ONE, and most fans stateside look down at ONE.  They see them as inferior.  What does it tell you that the promotion who’s top stars in the USA are retired MMA stars Rich Franklin and Miesha Tate, are able to send talent that goes toe-to-toe with two of the best the UFC have had in the last five years?

It means this aura that the UFC is the home to the best is a joke.  A fabrication, sold by a company and bought by the media.  MMA math is a joke and the only reason you think Colby Covington and Kamaru Usman are the best are because the UFC has told you they are, and you accept that as fact.

Now yes, the UFC is home to some of the best fighters in the world, I’ll never deny that.  Even if their top star actively tests for PED’s all the time.

Yet, they’re not the end all-be all and that’s the truth.  The market share may not side with that theory but the facts do.  The UFC is incapable of signing every major level talent in the world, and the difference between the top guy in each division in each company is so minuscule that you’ll never really be able to tell them apart talent wise.

Enter Ryan Bader.  To discredit Bellator in 2019 is a joke.  Sure, in 2013 they were unknown and in 2015 they were doing freak show fights with Ken Shamrock.  Those days are gone and now they’re boasting the best Featherweight Division in all of fighting, as well as two legitimate star making Grand Prixs in Heavyweight Grand Prix winner and two division champion Ryan Bader and Welterweight Grand Prix  finalists in Douglas Lima and Rory MacDonald – the latter of whom is the current Welterweight Champion.

Both MacDonald and Bader are former UFC stars who are going up against the best of the best in Bellator and winning.  It doesn’t hurt that they’re now paying their talent better than ever, so they’re able to attract more names who are sick of the bullshit in the UFC.  Gegard Mousasi, Cris Cyborg, Josh Barnett and others are in the promotion now, former mainstays in the UFC, and are helping change the narrative of the brand.

Sure names like Roy Nelson and Frank Mir still limp around, but they’re merely name brand fodder for Vitaly Minakov.  Minakov was undefeated before a close loss to Cheik Kongo, who’s now facing off with Bader later today (September 7th) for the Bellator Heavyweight Championship.  Minakov serves as one of Bellator’s best heavyweights and someone who fans should be paying attention to.

Yet it’s Bader who wants to do the work that few do.  Bellator is going to do the tried and true gamble of sending their top prize fighter to another promotion in a title for title match.  They’re already 0-1 when doing that.  Darrion Caldwell came up short against Rizin and Bellator Bantamweight Champion Kyoji Horiguchi, someone many experts believe to be one of the best in any promotion in the world.

Bader hopes to avoid the same mistake that Caldwell did, dropping two fights back-to-back against Kyoji.  The current Light-Heavyweight champion in Rizin is the inaugural champion Jiri Prochazka.  Prochazka is a whopping 24-3, last defeating Muhammad Lawal to win the inaugural title.  As Rizin is still fairly new, there is no heavyweight champion, so that means Bader would only be going after one belt.

If Bader could beat a renowned fighter like Prochazka, then the world would have to take notice of a man with three titles to his name.  That’s the whole point of taking these risks.  What if they pay off?  If they don’t, there’s no real issue.  Bellator is scene by most as #2 in the world and Bader losing to a Rizin champion wouldn’t hurt Bellator, and would actually help Rizin some.  Each promotion is in a win-win with this match.

However, Bader has to get past former UFC fighter and now Bellator mainstay Cheick Kongo.  The fighter is on an eight-fight win streak and if Bader can get past him, then a fight with Prochazka is in the future.

Kongo is a catch fight, a term I’m borrowing from my time as a football player.  There were weeks every once in a while that we dubbed “catch weeks”.  A week where a team could “catch us” off guard.  It was usually a bad team right before a big match up and it was usually one thing that was drilled into our heads – don’t lose this game.

For Bader, Kongo should be easy work.  Bader is a more complete fighter than UFC Heavyweight Champion Stipe Miocic and he’s considered “the greatest heavyweight ever”.  Sure.  I like Miocic, I do, but the man looks like a 70 year old grandpa on the dance floor every time he tries to do anything that isn’t throwing punches standing up.  That’s why it’s so important that Bader proves he’s a complete fighter and smash Kongo into bits.  Get out with the dominant win and start making nonbelievers into acolytes.

Truthfully, and I’m sure Bellator would agree, the worst case scenario for upward momentum is for Bader to lose to Kongo.  Kongo has earned the title shot, no doubt about that, but Kongo is 44 and isn’t that marketable.  He has a lot of good wins in Bellator, deserving of a title shot.  But just because you’re deserving of a championship opportunity, doesn’t mean you’re going to make a good champion.

Bader, much like Welterweight Champion Rory MacDonald, has to win his next title match.  Bellator has to prove their young studs are up to the task and can be the best in the world if given a fair shake.

If Bader can smash his way through Kongo tonight, then he’ll be one step closer to helping Bellator fighters be seen in a better light.