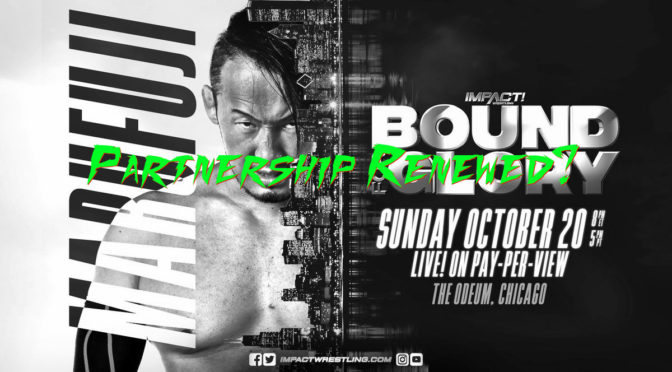 Pro Wrestling NOAH’s biggest name and arguably their ace, Naomichi Marufuji will be heading to Chicago in Bound for Glory for a purposed match with Michael Elgin apparently.  Not sure what Marufuji did to Elgin; pissed in his oatmeal maybe?

NOAH had a working relationship after Jeff Jarrett returned to IMPACT in 2017, and brought over Marufuji and Taiji Ishimori for a handful of dates.  Ishimori even won the X-Division championship during his time in the company.

In exchange the company sent Moose, Eddie Edwards and James Storm over for the company, where Edwards won the GHC Heavyweight Championship, becoming the first Caucasian and foreigner to win NOAH’s biggest championship.

Major League Wrestling also has a partnership with NOAH, having sent Alexander Hammerstone – the promotions Openweight Champion – over to NOAH to take part in their N-1 Victory Tournament.  The tournament is ongoing, with Takashi Sugiura, Go Shiozaki, and Masaaki Mochizuki currently tied for the lead.

IMPACT and MLW worked together over this past April’s WrestleMania weekend when Low Ki appeared for IMPACT despite being under contract with MLW.   So it appears that the three companies are working amicably, which is good, because MLW shares a lot of talent with IMPACT.

So it’s good that the NOAH might be back in some capacity, and it’s even better that MLW and IMPACT continue to play nice.  Maybe they’ll put on a joint super show next April?  That’d be awesome.

I do want to point out that this might be a one-off deal, as Eddie Edwards made some appearances for NOAH at the end of the winter of 2019 to help the brand relaunch in 2019 with a new identity.  Was that February/March just a one off, as well, or the start to a proper partnership?

We’ll have to wait and see.