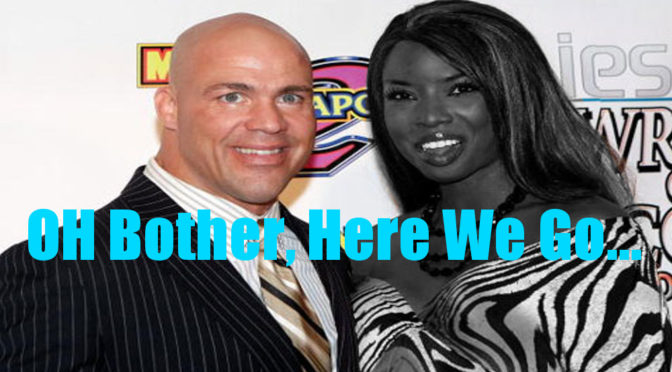 Remember a decade ago?  Simpler times man.  It wasn’t that hard to be an IMPACT Wrestling fan, nor was it that hard to point out the WWE’s problems (hint, nothing’s changed in ten years).  Kurt Angle was in his wrestling prime and ROH wasn’t a dumpster fire.  Plus, the rise of Hiroshi Tanahashi as the hair-god that he is was just starting.

These were the good years.

Then a dark plague hit wrestling, one that has no end; The Hogan/Bischoff Era!

Yet in 2009 there was a major news story that really shook the wrestling world; Kurt Angle’s stalking arrest.  His then girlfriend Trenesha Biggers had an order of protection (restraining order) issued against Angle.  Robinson Township authorities arrested Kurt Angle in the Starbucks parking lot that day, as Biggers sat inside – allegedly.

All charges were dropped after the two sides agreed to engage in no further communications or contact with one another.

Well, it’s 2009 all over again because Biggers, the former Rhaka Kahn, is back in the news today for all the wrong reasons.  Crime Stoppers of El Paso has named Biggers as one of the cities most wanted fugitives for August 25th, 2019.  She’s wanted for interference with child custody.  Under Texas law, Interference With Child Custody is defined as;

…when someone takes or retains a child when that person knows that the taking or retention of the child violates a judgment or order.

Under Texas law, Biggers faces a two year prison sentence for this violation.  Possibly even more the longer she stays a fugitive.