According to PWInsider’s Mike Johnson, IMPACT Wrestling will now be picking up hotel costs for talent, thus eliminating one cost that adds up throughout the year for talent.  WWE, ROH and others used to do the same as IMPACT, hell even IMPACT used to do this back in the day, but that ended around the Bischoff/Hogan era.  I want to say it was before they came in, but it was definitely over by the time they left.

I’m glad that IMPACT will be helping out talent keep their money.  It’s also a good sign for those of you who want to proclaim that IMPACT is ‘dead’.   Companies that are in trouble try to cut costs, not add to them.  This year a lone IMPACT has scheduled expensive tours of California, Mexico and even ran New York city while targeting Chicago later for Bound for Glory.

They also poured money into the IMPACT Plus app, improving it and making it one of the better apps on the market place for wrestling content.  The interface is smooth, the late out is great, and the content is top notch.

Now, IMPACT is picking up the bills for the wrestling talent’s hotel stays.  Add on the alleged rumor (from Chris Jericho himself) that IMPACT offered him a seven figure deal, and a comparable deal for Kenny Omega and you can see that IMPACT isn’t skimping on anything.

There’s reason to be optimistic about IMPACT right now, even if times are tough.  IMPACT’s parent company is in talks to acquire 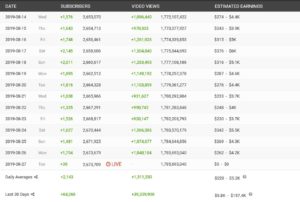 AXS TV, and talks are ongoing as of the last report, they just shot a pilot for a secondary studio show, and their social media numbers on YouTube and Twitch are going up and up.

Both YouTube and Twitch have not had a month this year where they haven’t grown in subscribers and followers. 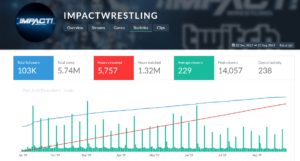 They’re a partner on Twitch, which is good (but not great) money, and they can average anywhere from 9k to 157k per month on the YouTube side of things.  I’ve heard from a trusted source that IMPACT pulls in around seven figures a year from YouTube alone.  That’s not counting the amount they make from Twitch, or their paid subscribers on Twitch (information is not available).

Yes, the Pursuit deal sucks.  Yes the network is a joke.  Yes, they need a better T.V. deal, but IMPACT is actually turning a profit by all indications.  They no longer paper venues, or give away free tickets at Universal Studios.  They’re gaining traction and buzz with each and every passing week, and things are starting to look up.

They need to find away to have people talking about them every week though, and I think doing “revealing” interviews on a public forum like YouTube or on a podcast would help.  Cause some stir and get some memorable quotes out there.  Leak out some rumors and news on the weeks you’re not taping content, just to get the buzz going.

That’s the big issue with IMPACT, they’re not going out of their way to generate talking points.  That’s how you stay relevant in today’s day and age.