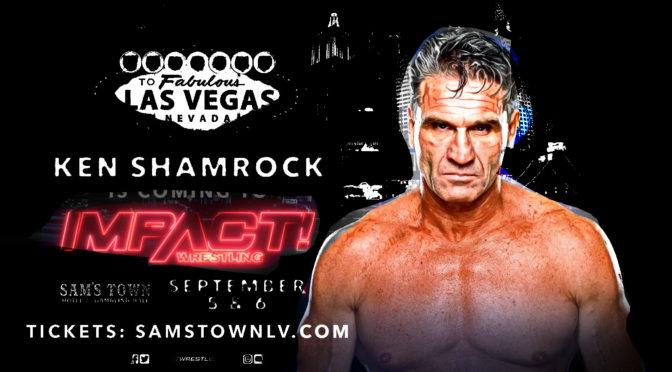 It was June 19th, 2002.  The setting was the Von Braun Center, on a warm summer’s night in Huntsville, Alabama.  The wrestling landscape had already seen future Hall of Famers like Jerry Lynn, Low Ki, AJ Styles and James Storm; as well as current Hall of Famers like Dory Funk Jr. and Ricky Steamboat

All this on IMPACT Wrestling’s first ever show.  Granted back then IMPACT Wrestling was known as NWA-TNA.  That first show for the now-named IMPACT was a huge one.  A who’s-who of future and current stars fought in the main event to try and become the first World Champion of the NWA-TNA era.

The main event was set, a battle royal for the vacant NWA World Championship.  A main event made necessary due to then champion Dan Severn not being able to come to terms with the promotion.  So instead of Severn coming in to defend the title, co-founder Jeff Jarrett, perennial runner up Scott Hall and recently un-retired Ken Shamrock became the sticking points for the show that night.

Jarrett got eliminated by Toby Keith and Scott Hall would never live up to expectations.  Go figure.  So the burden of winning came down to Ken Shamrock and former WCW wrestle The Wall; now known as Malice.  Malice and Shamrock closed the night out, with Ken being able to outlast Malice, before putting him away with a belly-to-belly suplex.  Three seconds later and Shamrock had done something he’d never been able to prior; win a World Championship in pro wrestling.

Shamrock celebrated as pyro went off, and a new era was born in the world of pro wrestling.  An era sidelined forever because of Tito Ortiz and the struggling UFC.  By August Shamrock would be gone, opting to instead return to MMA for one of the early super-fights of the UFC era.  A date on November 22nd against Tito Ortiz, the then light-heavyweight champion.

Since that first fight back in the UFC against Tito, Shamrock is 3-10 in MMA fights.  It would not go Shamrock’s way.  A brief return to TNA in 2004 later, and Shamrock would not have wrestled for the promotion in 15 years.

I’m not one to tell someone what they should’ve done professionally but one has to wonder ‘what if’?   What if Shamrock didn’t leave TNA in 2002.  What if he stayed with them for the long haul.  What if he was there when Samoa Joe and Kurt Angle came in?

What if he, and not Jarrett, became one of the winningest wrestlers in the companies history? The now 55-year-old Shamrock is still in fantastic shape and has started working towards opening his own bare-knuckle boxing league. Shamrock will get to show the world what he can still do as he starts a program with Moose and it all starts in Las Vegas in September.