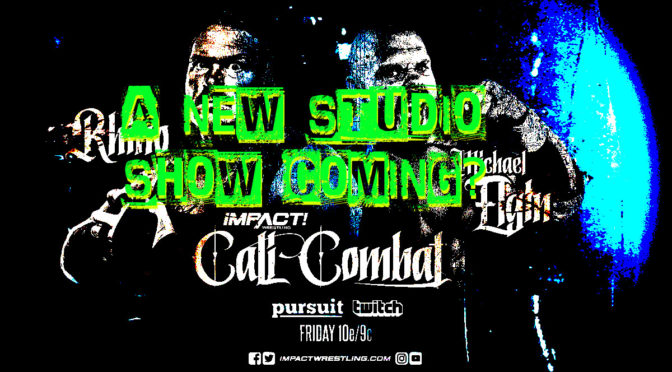 I’m reading the tea leaves on this one, yes, but there’s a good reason to.  IMPACT is owned by a production outlet, Anthem Media. Anthem owns the popular Fight Network that airs in Canada and are hoping to gain the capital required to purchase AXS TV in the United States.  The obvious hope is to expand their reach past Canada and go international.

Anthem also owns IMPACT Wrestling.  IMPACT Wrestling ran a small venue in California that also doubles as the home of Championship Wrestling from Hollywood.  The event that they ran is being called Cali Combat and the word going around is that IMPACT deliberately ran a smaller venue in Los Angeles in order to tape a new backdoor pilot.

A “backdoor pilot” is a way for a television show with an established fanbase to test the waters of a spin-off series by airing it as a regular episode in the main series story.  See Wayward Sisters in Supernatural.

For IMPACT, this backdoor pilot is hopefully going to be packaged with the flagship show and pitched to networks as negotiations continue.  This could also be Anthem’s way of seeing how much content IMPACT can produce for a given week as they continue to negotiate with AXS TV.

This was partly why Anthem purchased IMPACT in the first place, in order to get a lot of content out of the promotion.  So this is a strong sign for the brand if a spin-off series is being discussed and shot.

The idea would be to make this show a studio-show, something IMPACT’s flagship show was for the longest time.  The NWA is also looking into having a studio show, which would go hand in hand with WWE’s NXT programming and WCW’s Saturday Night block from back in the day.

This is a good sign for IMPACT.  I hope for the sake of the company and history that IMPACT runs the old IMPACT Zone some more for nostalgia sake, but I admit I’m in the minority on that one.

So, what are you thoughts on an IMPACT studio-show returning to the air waves?  Tell us on Twitter @Nerdcorp !