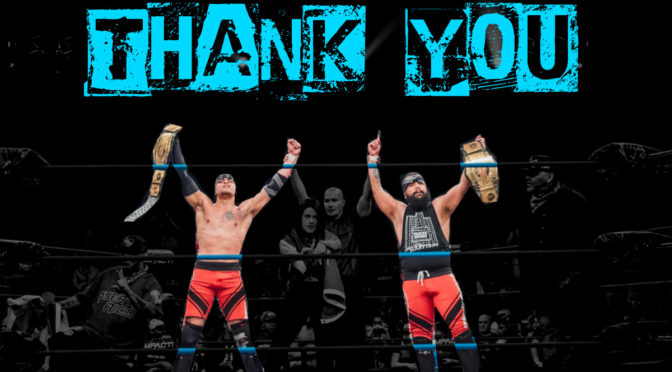 This won’t be long winded, because it doesn’t need to be.  Santana and Ortiz, formerly of LAX and presumably back as EYFBO (their previous tag name) are officially done with IMPACT Wrestling.

Wrestling their final match for the promotion in Mexico, the duo took on The North for the IMPACT Wrestling World Tag Team Championships and came up on the losing end.  Post match saw just about all of the IMPACT roster come out and send off Santana and Ortiz to a huge round of applause from the fans and wrestlers a like.

A standing ovation on their final night and it was well deserved.

The duo took only two and a half years to become one of the greatest teams in company history. They sit atop the mountain with Beer Money, America’s Most Wanted, The Wolves, the Motor City Machine Guns and the first (third?) incarnation of LAX; Homicide and Hernandez.

Their feuds with the foreign promotions (AAA/NOAH), oVe, The Lucha Brothers and most recently The Rascalz and The North – helped put over all of the teams they stepped in against.  oVe and The Rascalz were propelled up the roster just by being in the same ring as the new LAX.  That’s how good and noteworthy they had become.

The end of 2017 really cemented what these guys could do, feuding with oVe and taking them on in one of the most brutal matches of all time; Barbed Wire Massacre III.  That night, partnering with Homicide, the trio took on The Crists and Sami Callihan in a match that put all six men over, despite the fact that the match never aired on t.v. like they thought it would.

The match set the tone for the Scott D’Amore and Don Callis ran IMPACT, having taken over after the outing of Jeff Jarrett.  The brand has since embraced the brutality of that night and found other ways of pushing the envelope.  An envelope that LAX brought to the table.

Santana and Ortiz were basically champions in the tag team division for three years.  They had four title reigns with the IMPACT version of the tag titles, one of only three teams to do so.  They have the most days for a singular reign with the IMPACT tag titles (261) and the most combined days as champion (662).  They also have the longest tag title reign in all of IMPACT history regardless of it being an IMPACT/TNA/GFW or NWA tag team championship, surpassing America’s Most Wanted 250 days.

They’re off to either WWE or AEW at this point and wherever they go they’ll be a team to watch.  My hope is AEW, as they’ll actually be given a chance to shine in AEW, but that’s just my personal feelings.  Either way Santana and Ortiz have earned their big payday, and their IMPACT legacy is beyond entrenched.

LAX will more than likely be back with two new members, which shouldn’t surprise anyone.  The original duo was Apollo and Homicide, with the former being replaced by Machete, before finally having Hernandez solidified the duo.  So LAX has now had four incarnations (five counting Daga and Ortiz) of the team, so I would bank that another is coming soon now that Ortiz and Santana is done.

Will the team ever live up to Ortiz and Santana’s run?  Who knows, but I had doubts they’d live up to Hernandez and Homicide, so anything’s possible.

Good luck in your future endeavors boys, you absolutely killed it.  Thank you.