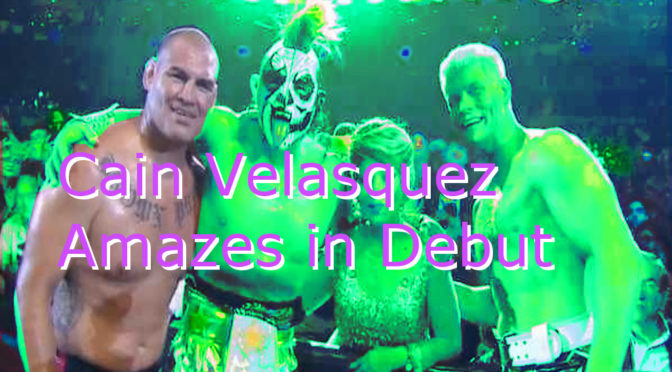 Cain Velasquez defeated Brock Lesnar and became a god in MMA.  This past Saturday, Cain again became a god but to an entire group of sports fans.  Debuting for the Mexican promotion AAA, Cain shook the world at the Mexico City Arena in Mexico City in a trios match up.

Tagging with Psycho Clown and Cody Rhodes against Texano, Taurus and Killer Kross, all eyes were on the former UFC World Heavyweight Champion as he debuted in a wrestling ring.  In front of people that he shares heritage with, Velasquez went bonkers and showed the world he wasn’t just doing this as a goof.

Debuting under a horned mask, Velasquez got right to work throwing his opponents around and even hitting a hurricanrana in his first minute of ring time.  The crowd popped, the fans online went wild and a new star was born.

Velasquez ‘s already said he has two more bouts this year alone that he wants to do, as well as keeping his eyes on a return to MMA some time soon.  With how the wrestling world took to him, a return to MMA may not be necessary.

The Brock-Beater may have had the greatest rookie debut on a major stage in the history of the industry.  D’Angelo Williams and Ronda Rousey had amazing performances, same to Stephen Amell.  Yet, Velasquez’s appearance was on another level.  There was no delay for the hot tag, in order to hide the new star’s weaknesses.

No, Velasquez not only worked a majority of the match but he even sold some of it.  So it was no surprise that Velasquez got the finish, taking Texano over on a suplex and locking in a kimura for the win.  Velasquez celebrated with Cody and Psycho Clown but Killer Kross, angrily form the floor decreed to Velasquez that it wasn’t over between the two martial arts competitors.

Will Velasquez make the change permanent?  There’s a lot of promotions out there that’d love to have him, especially if he continues to improve.  AEW, AAA, NJPW and MLW all seem likely landing spots for a full time run should he decide that’s what he wants.

Hell, maybe Junior Dos Santos, a Velasquez rival, might think about entering pro wrestling as well.  Both heavyweights had successful careers in MMA but a sport switch might prolong their careers and staying power.

The future is bright for the ex-champ, and the world of wrestling is a welcoming one to him.  I hope he sticks with it because I think he could be super special; just as long as he changes his wrestling attire to trunks.  Otherwise we’re going to be super put off by those weird pants he wore.

Good job, Cain.  You did great.