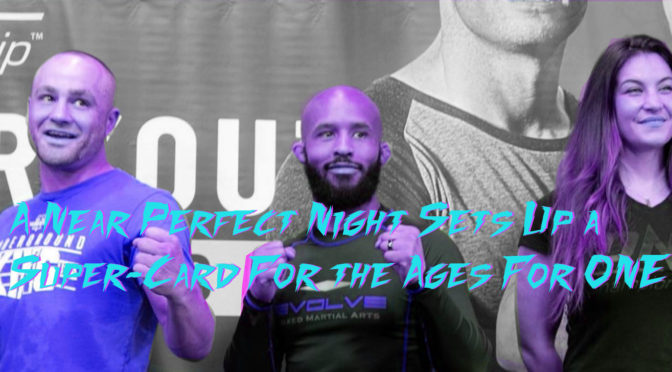 I stayed up to watch ONE Fighting yesterday morning, and I’ll never do that again. No, instead I’ll just set my alarm so I’m not a ghost through the final fights.  That said, I watched every fight and I have to say that the night nearly broke perfect for ONE Fighting.

The MMA/Muay Thai/Kick-Boxking outfit held one of their biggest shows with arguably three of their biggest stars all on the same card.  Both UFC transplants Eddie “The Underground King” Alvarez and Demetrious “Mighty Mouse” Johnson both won their semi-finals of their Lightweight and Flyweight Grand-Prix semi-finals match up’s.  Alvarez defeated Flilipino standout Eduard Folayang early in the 1st round by submission, while Johnson defeated Japan’s Tatsumitsu Wada by decisions.

Australia’s Martin Nguyen retained his Featherweight ONE MMA championshpi over Japan’s Koyomi Matsushima in the main event, but it was the co-main that seemed to go a bit sideways.

Thailand’s Rodtang Jimuangnon defeated England’s Jonathan Haggerty for the ONE Muay Thai Flyweight Championship, in what was a bit of a blow to the promotion.  Haggerty was someone ONE was clearly hoping to bank on in their global expansion, but it’s the biggest loss ever as Rodtang is considered a local hero.

While the local hero winning is great for attendance, ONE is banking on rights fees for their grown and evolution as a fighting promotion.  In order to get better rights fees around the world, they need more global talent to market.  Haggerty had the looks, the skills and the appeal, so him losing the title does hurt the brand.  That said he’s only 22 and has a long career ahead of him, so I’m sure ONE isn’t upset about the loss.

ONE has two more cards in August, but the next big event is in October for the event titled Century.  This card could be huge as just about all of their biggest international draws are on the card. Canada’s Angela Lee is defending her ONE Women’s Atomweight MMA championship against China’s Xiong Jingnan, while American and former UFC fighter Brandon Vera is going after the top Myanmar’s Light-Heavyweight Aung La Nsang for said ONE Championship that Aung carries.  The bout is a big one for Vera who is getting big traction for ONE and even invited The Rock to come watch him fight Aung for the Light Heavyweight championship.  Since Vera is the Heavyweight Champion of ONE’s MMA branch, it would make him a duel champ, something Aung (Middleweight and Lightweight) already is.

That card, in any promotion, is a stacked card and potential to be a show of the year.  That show goes down on October 13th of this year, from the Ryogoku Kokugikan in Tokyo, Japan.