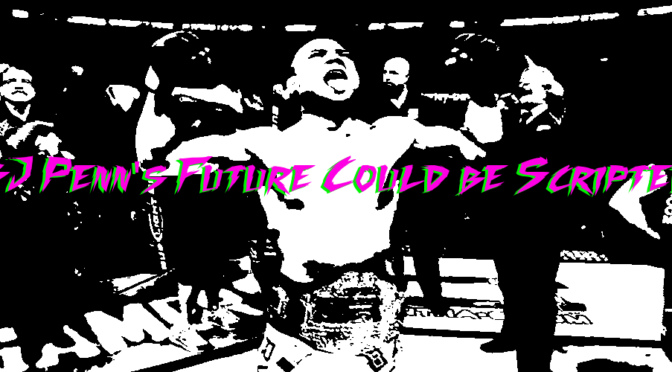 BJ Penn is wrapping up his UFC career after his next fight.  He’ll face Nik Lentz in what Dana White has said to be Penn’s last fight in the UFC.  Penn has already retired once, so the prospect of this being it does hang over head.  Sure, Bellator and ONE could come calling but if he didn’t leave before, why would he leave now?

Penn has a lot of issues surrounding him at the moment, that can’t be avoided in this discussion.  He has an order of protection against him, which isn’t an admission of guilt.  Merely a measure the courts use to help limit issues that may transpire. Is Penn the innocent bastion of light the UFC presents him as? Or is he a monster who torments those he loves?  More than likely it’s somewhere in between.

Yet, personal conflicts and moral issues aside, I’m here to suggest something to Penn (aside from consoling which he may need); retire from MMA and go into pro wrestling.  Wrestling is far less aggressive on one’s body than MMA, and wrestlers can compete for 30 odd years without missing much of a beat.  Yes, BJ Penn is 40.  So 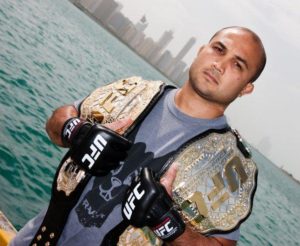 what?  In the world of pro wrestling, 40 is your prime.  It’s when you’ve put it all together.

Stone Cold Steve Austin, Bret Hart and so many others didn’t win their first world title until 35 at the least.  Hiroshi Tanahashi is just about as good as he ever was 10 years ago and he’s 42.  It’s not the age that renders a wrestler a relic; it’s the wear-and-tear of constant abuse.  This is a problem that (hopefully) hasn’t plagued Penn.

What Penn brings to the table of pro wrestling is obvious name recognition but also the ability to elevate a light-weight division.  Imagine if Penn joins the WWE and goes to 205 Live.  Instant credibility for the brand.  All of a sudden the belt has value, and the brand has a star.

You’re not going to bring in Penn to be Brock Lesnar, but you can bring him in to help bolster a sagging show, and maybe help round out some major event cards.  He can be used to help put over newer stars and by incorporating more realistic fight sequences into matches to help them stand out from one another.  That’s a big issue within the WWE, why have a Cruiserweight Division since the heavyweights do the same moves?  Penn could bring a new flavor to the division.

It’s a long shot, and one that has it’s fair share of criticism and concerns but it’s also one with tremendous upside.  He doesn’t have to go to the WWE, and I doubt his past will be too much for people to look past; wrestling fans are fickle and shallow after all.  It’s worth the gamble if you can afford to bottom out with the move.  If it works, it’s an all time great hire.  If it fails, it’ll be a stain for some time.  That said, I think it’s worth the shot.