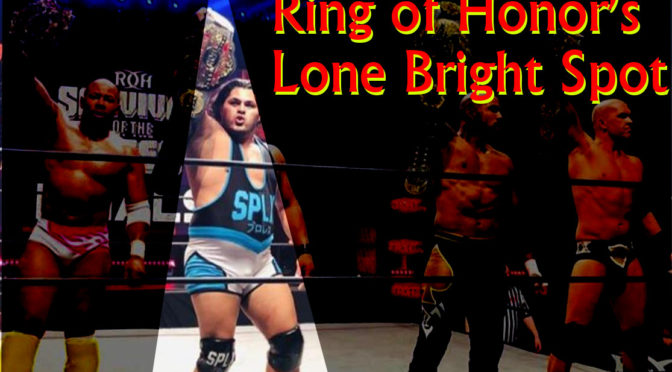 Jeff Cobb might be the best thing going for ROH right now.  Jay Lethal is still there but outside of those two, ROH is in trouble.  According to Cobb however, ROH is fine.  Cobb in a recent CBS local news interview put over the CMLL stars Rush, Bandido and Dragon Lee as huge names fans just have to get used to, then name dropping PCO and Brodie King. Cobb feels the new guys will be fine and that they’ll be able to get ROH back to where it was.

Yet, Cobb is the only name in that list that fits the traditional ROH-style-guy.  Daniel Bryan, Samoa Joe, CM Punk, Nigel McGuinness, Davey Richards, Eddie Edwards and others with combat fighting styles all came through ROH and built the brand as a NJPW-of-the-West type promotion.  Some time after the departures of these key guys, the company turned to more sports entertainment talent.  More Adam Cole’s, Moose’s, Dalton Castles’s and eventually Matt Taven types.  Guys who weren’t as good as the previous era of wrestlers and it showed.  It continues to show.

Cobb is the last guy on the roster, besides a Jonathan Gresham really, to truly feel like that kind of strong-style type of worker.  I don’t believe Cobb is long for ROH and I think a full time jump to NJPW is in the cards.  Where he ends up though is truly anyone’s guess.  After all, Daniel Bryan un-retired with a ‘bucket list’ of things he wants to do; only to re-sign with the WWE – prompting ending the ability to complete that list.  So clearly wrestler’s motives for why they wrestle is ever evolving.

Another big issue with ROH right now is they just lost three of their five biggest names.  NWA World Champion Nick Aldis, Eli Drake and NWA National Champion James Storm; all of whom had been appearing on ROH broadcasts, are done with the promotion.  The NWA have ended their working arrangement with ROH and there are reports that NWA exec Dave Lagana ended his relationship with ROH this past month as well.

The goal is to launch NWA as it’s own brand this time around, just as soon as NWA Owner Billy Corgan’s most recent Smashing Pumpkins music tour wraps up their current set of shows.  The NWA have some decent top talent that could easily supplant ROH as the 4th biggest fed in the States in one fell swoop.   The move truly hurts ROH, which needed the star power (what power he has that is) of Nick Aldis.  Prior to the split, Aldis was the most over World Champion on the brand, and the one most capable of having the best match.

ROH’s current World Champion Matt Taven has been a flop as champion and the declining ticket sales don’t help argue that point.  His matches are uninteresting at best, and down right awful at worst, while being incredibly unathletic.  In regards to his physique, he’s  unmotivated to get in better shape, which hurts his appeal and look.  A wound to his legitimacy is something he can’t afford.  Worst of all however, is the fact he’s completely boring to listen to.

With the NWA pulling out and NJPW becoming more and more unhappy with ROH, it’s very likely that the ROH/NJPW split happens sooner than people realize.  This might be ROH’s last hurrah as a mid-major ranking in the United States unless something drastic happens.  Right now if it wasn’t for Sinclair owning and wanting a cheap TV show for their Sinclair Broadcast Networks, it’s very likely that a ROH would simply be another tab on the WWE Network right now.