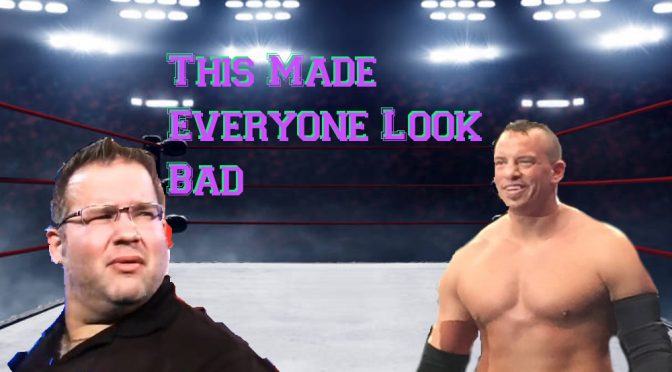 Full disclosure, I like Scott D’Amore, IMPACT Wrestling and KM.  I have no dog in this fight, that being said last night the two parties embarrassed themselves.  For reference, I’m counting IMPACT/D’Amore as one entity.

KM responded to a comment on Twitter about how he prefers his current situation as opposed to him working with IMPACT anymore.  Scott D’Amore, who has a habit of ribbing people he worked/work’s with on Twitter, responded to this.  The tone D’Amore apparently was going for was a jovial one, but that’s not how it landed with KM. 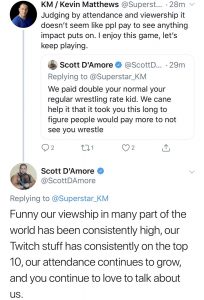 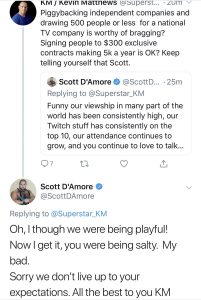 There were about five or six messages exchanged between the parties but these were the only three that i saw that survived.  Both men deleted several, if not all of the tweet exchanges, presumably because they knew it made them look unprofessional.

This also opens up a conversation about KM being the one leaking information to various outlets about the pay.  Most talents aren’t so brazen when talking about their pay or lack there of.  For KM to do so in an open arena like Twitter hints that he’s been frustrated for a long time and exchanging public barbs with a former boss sure seems like the actions of someone who’s already shared his feelings privately with a reporter.  That is just speculation though.

Neither side looks good here and here’s hoping that both individuals learn from this and move on.  It’s not the worst thing either side could of done or said last night  Considering Joey Ryan thinks making rape jokes is ok in character, and Many Leon assaulted a fan last night, as far as scandal goes, this isn’t going to rank too high.

With KM’s ties to WrestlePro and IMPACT’s working relationship, seeing how both parties move on from there will be interesting.