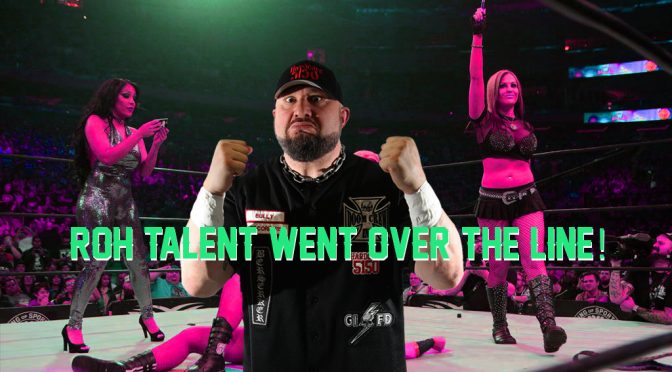 ROH is the midst of a shit show these days.  With subpar booker Delirious allegedly being forced out of the promotion in favor of Bully Ray, many actually saw this as a step back for the promotion.  During the new regime reshuffling, talent like Enzo Amore and Big Cass were signed, and subsequently fired from the promotion.

Now, at the June 2nd tapings in Portland, Oregon we have another incident added to the list.  According to a fan known as Josh on Twitter, Mandy Leon apparently put her hands on a fan after spitting on him.  This lead to words being exchanged with Velvety Sky; though nothing apparently out of the ordinary.  You can view the pertinent tweets below;

Show starts. Dark match is some local girls fighting. Allure interferes at the end. Velvet and I exchange words along with the rest of the Allure. Nothing crazy. Mandy Leon spits on me from the side. Not preferable but I honestly don’t care. Segment ends

Some opening match happens. Wildly unimportant. Second match occurs and it’s a local v a local. Allure interferes at the end. I’m mouthing off to all the girls for no reason other than THEY’RE THE BAD GUYS
“Boo… you’re trash… get lost… no one wants you here… etc”

At some point Velvet Sky seemingly loses her cool & is challenging me to come in the ring. Tells me to suck it, calls me a pussy, etc
No prob. Get your heat

She calls me a virgin. I remind her she has sex with that fat turd Bully Ray. Call them the tramp stamp trio. End segment

She goes to the back. Fast forward about five minutes & I get a tap on the shoulder

“Hey, we’re with security and need to talk to you about an incident that occurred”

Security takes me legit backstage. I’m still perplexed by the entire thing and was honestly very hesitant to follow them because they kept saying “we need to talk to you about an incident”.
No details behind just leading me into the back. What’s happening? What’s waiting for me?

Suddenly BULLY RAY comes out from a back room. Full on gear since he was in the opening segment of the show and he looks PISSED. Much bigger than me so I’m kinda taking a step back on this here. Security backs off and it’s just us two

He said “hey. I heard there was incident tonight with you and some of the girls”

“So here’s the deal. You’re done talking down to them. You need to treat them with respect. Don’t be saying anything you wouldn’t say to your mom, you got it?!”

I’m not trying to act tough. I was legit being intimidated with purpose and I wasn’t about to get kicked out during match 3 so I just bit the bullet and said “sure… yes sir… yeah, I understand… yup…”
He said “End of convo. Go be a fan”

Security led me back to my seat

Keep in mind, for anyone who might take the side of Leon and Sky that former IMPACT Wrestling performer Gursinder Singh bragged about having rocks thrown at him due to how good his heel-work was yesterday.  (He told us that he was fine.)

Had wrestling fans throw ROCKS at me today. If that isn’t heat then I don’t know what is! 😂 #wrestling

Now not every performer should or will react the same way, but perspective is needed.  The fan was doing his part for the performance and it was clear that the girls clearly overreacted.  This isn’t too surprising as Leon has been a hotbed in recent years of controversy in the locker room.  She was involved in an incident with a referee a few years back that lead to the ref’s termination over misconduct.  The ref claims however they always had a playful banter, until that night, because Delirious observed the antics in person for the first time.  Leon also threw Scarlett Bordeaux under the bus during their time in ROH together.

Sky’s currently dating Bully Ray and has been doing so for at least five years; if not longer.  Sky was dating Chris Sabin in IMPACT Wrestling during their time together and there are rumors online that seem to hint at “overlap”, though that’s just speculation.

Both talents have been known to overreact and blow things out of proportion but when you run to your booker and he THREATENS a fan, that’s when people need to start losing jobs.  Bully Ray absolutely had no business threatening a fan.  I don’t care if he didn’t “threaten” a fan, when you have security escort you backstage where you’re clearly outnumbered and at the whims of the people backstage, there is no way in hell that isn’t “threatening” behavior.

ROH is a shit show, and this just doubles down on that.  If Joe Koff was awake at the steering wheel, he’d fire all three parties involved and move on.