I have a feeling for this column, if not necessarily a point. I grew up a fan of WCW.  The first guy who I ever saw that made me ‘ooh’ and ‘ahh’ was Sting.  It was his classic with Ric Flair at the Great American Bash in 1990, which also served as Sting’s first world title win. It hooked me like few things have, and I’ve been watching ever since. 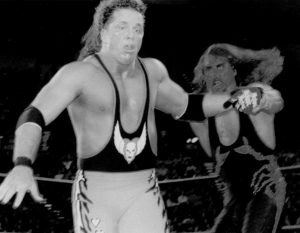 For me, some of the best wrestling in WCW happened from about April of 1998 to about May of 1999.  Not everything was great but some real gems existed in that time that helped shape my expectations of what good wrestling is.  Raven and DDP, Rey and Juvi, Goldberg and DDP, the tag division in the first half of 1999.  It was all so fantastic.

Yet, two of my favorite matches happened in Halloween Havoc 1998.  Firstly, the aforementioned Goldberg and DDP match which closed out the night was easily Goldberg’s greatest match ever.  Sure the match has a bit of urban legend lore, with the fact that it was cut off just prior to the bout taking place due to time restraints, but the match itself outshone the drama of the moment.  DDP’s Diamond Cutter had been so protected that fans really believed if he hit it on Goldberg that it’d be over.  Sure enough, DDP hit Goldberg with it, and the roof was blown clear off. 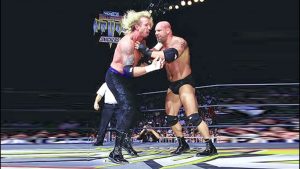 I’ve taken the stance for years that was the night Goldberg should’ve lost, when Page was never hotter but that wasn’t to be; Goldberg retained.  It wasn’t a huge issue for me, as I love both men as performers.  I just think when you look at how poorly both men were used at the turn of the next year, that Page winning the title here might of kept both men on hot streaks.

The other match of the night I still look back at fondly, even though it’s not the classic it should’ve been was Bret Hart vs. Sting.  Sting and Hart had little in common except for their shared use of the Scorpion Deathlock/Shapshooter finisher, but that was enough. The two had a lacking angle heading into the bout, but the two men had a somewhat enjoyable encounter at the event nonetheless.

Sure, it ended with Hart using a bat on Sting, in order to write Sting off, but I still appreciate the match even if it’s not the all time classic it could’ve been.

I bring this up because both men returned to Las Vegas, and the arena that hosted the ’98 Halloween Havoc; the MGM Grand Arena.  On that night in 1998, Hart retained his WCW United States Championship and Page fell just short for the WCW World Championship.  Yet on this night both men were a bit older, a bit slower and far from being active wrestlers.  Page last truly wrestled fourteen years ago for TNA, while Hart has been pushing nearly twenty years in retirement since suffering multiple concussions in WCW over the course of a month.

Twenty-one years later after that iconic, if for all the wrong reasons, pay per view event, both men were on hand to pass the torch.  Page came out to take Brandi Rhodes away from the fray, that she was injecting herself into the bout featuring her husband Cody and brother-in-law Dustin.  Hart, who retired as WCW World Champion, came out to unveil the AEW World Championship in a segment with two of AEW’s blue-chip talents; Adam Page and MJF. 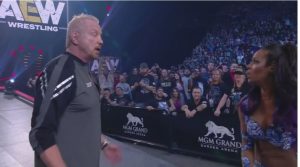 While too many this was just a cool moment featuring two icons, but to me it was a passing of the torch so to speak.  Seeing Hart and Page come out and get involved made my soul happy.  Sure their time as competitors is long and done, but to see them still involved is a wonderful thing.

AEW joins ROH and IMPACT as viable alternatives to the WWE, and unlike Global Force Wrestling, World Wrestling All-Stars, the Xcitement Wrestling Federation and other start-up promotions, it looks like AEW’s first show was a success and that their future is bright.