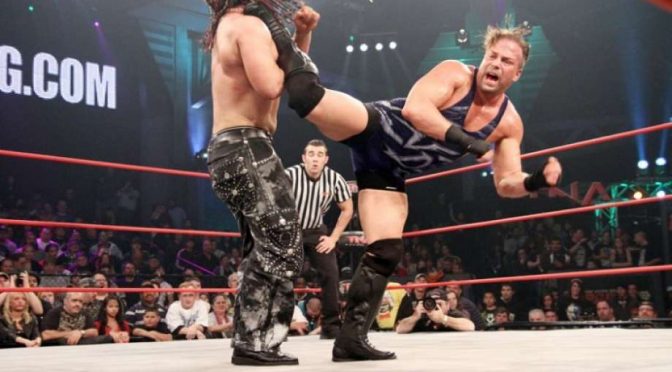 The Sporting News got an exclusive.  According to an interview they did with Rob Van Dam, the former IMPACT World Heavyweight Champion is going to be back in IMPACT going forward on a short-term, non-exclusive deal.

Van Dam will start working for the company in earnest at the April 29th tapings, after their Rebellion event.  While talking to Sporting News, RVD revealed he wasn’t just there to compete with guys who “stole” his moves, but was there to be himself, saying;

It looks like you are going to be seeing my face around for the foreseeable future.  We have an agreement to where I will be sticking after the show on Thursday. It does have a beginning and an end, but they can extend, so this is something to start us off. I had agreed to one match, and then we talked about and discussed doing their upcoming tapings after the show on Thursday and a couple of television tapings over the next few months. We looked at the schedule moving forward, and they asked if I was available. I told them I was.

We will see how it goes. It’s a pretty friendly schedule, which has always been important to me. I want to be home more and on the road less. That’s still something I’ve done since I left WWE in 2007. Impact with their schedule and the position they want me to fill for my career seems like a perfect situation. Hopefully it will be mutually beneficial, and we will see “The Whole F’N Show” back on television. Let’s see how all these new guys matchup to me. I’m not there to compete with the guys who have stolen all my moves (laughs). I’m pretty much there to be myself.

All Elite Wrestling has released a press release detailing that Jim Ross has in fact signed on wit ha three year deal, that will see him serve as Senior Advisor, and will make his first appearance at Double or Nothing. While it doesn’t state he’s a commentator, out right, the press release does call the deal the “most lucrative deal in pro wrestling commentary history”.  The full press release can be read in full over at WrestleZone’s website by clicking HERE.

In follow up news, AEW also announced that Alex Marvez and PWG commentator Excalibur will handle lead, and play-by-play duties at Double or Nothing respectively.  According to Justin Barrasso of Sports Illustrated, Jim Ross will also serve as a commentator for the event, though if the SI report is true I wouldn’t be surprised if Ross only called one match.  Also joining them are going to be former WWE ring announcer Justin Roberts and former IMPACT Wrestling backstage interviewer Alicia Atout.  Both individuals will serve in the same roles for AEW, as they did elsewhere.

Quick Hits – The Usos aren’t going anywhere, according to PWInsider, as they’re reporting the twins have signed new WWE contracts.  Rey Mysterio’s ankle injury is supposedly real, and despite being pulled from SmackDown because of it, he’s still expected to be at WrestleMania as of press time.  Dave Meltzer is reporting that Lars Sullivan will be making his main roster debut “imminently”.