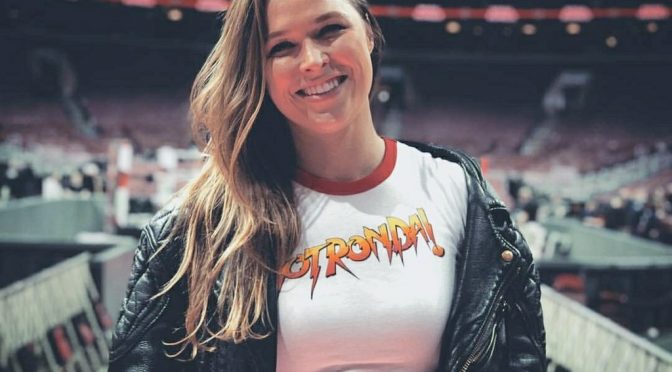 WWE may not do another Women’s Evolution event without Ronda Rousey, according to the Wrestling Observer.   Earlier this month Stephanie McMahon remained non-committal about a second event when talking to The National, saying they “haven’t announced any plans” and then went into P.R. spin about how “big” the poorly attended show was, with estimates as low as 7,000 paid, and 3,000 comped.   This also indirectly reveals how the WWE sees Becky Lynch and Charlotte Flair, that they can’t draw gates.  Rousey has also taken credit for the women headlining WrestleMania, which isn’t an unfair claim.

Meltzer is also reporting that All In 2 will be at the Sears Centre on August 21st, of this year.  This more than likely comes from All Elite Wrestling themselves,  as the group and journalist have been friends for some time, and it makes all the sense in the world that AEW would give information to a journalist they trust.  This news was hinted at when The Young Bucks and Kenny Omega asked the Chicago crowd at the C2E2 convention event this past week.

After Johnny Gargano took to Twitter to talk about how he still has his rejection letter from the WWE, his former Chikara colleague and fellow member of F.I.S.T. (Friends in Similar Tights), Chuck Taylor, responded with a screen shot of his own rejection letter from the WWE.  Both former members of F.I.S.T. are in career years as Garagno’s exploit’s are well known, but Taylor just wrapped up a stint in New Japan Pro Wrestling and Ring of Honor before signing on with All Elite Wrestling with current tag partner Barreta

Ryan Satin is reporting Goldust will become a free-agent in the coming weeks.  This is something we’ve known for some time as I’ve speculated that he might be Cody Rhode’s mystery opponent at Double or Nothing.

Quick Hits – Jim Ross feels Kofi Kingston’s race should never of been brought into the angle for WrestleMania, citing the old wrestling edict of “race ,religion and politics” having no place in wrestling.  All things Vince McMahon violently abused.  Sammy Guevara doesn’t want to go to the WWE until he’s established a better brand with his name.  Meltzer claims that Asuka was booked to face off with Mandy Rose at WrestleMania, plans that will now no longer happen.