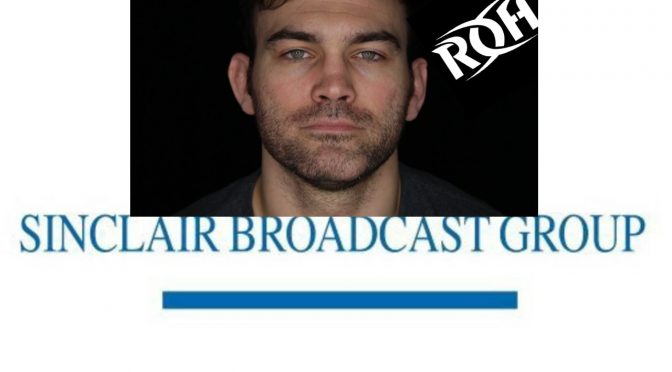 I want to be clear, I wanted to lead off today’s post about Josh Barnett and Minoru Suzuki gearing up to beat each other senseless.  Though, this story obviously has much broader implications.

Yesterday David Starr posted a video on social media, calling out Ring of Honor, their World Champion Jay Lethal and the ownership group of ROH, Sinclair Broadcasting.  He told Lethal he felt insulted that Lethal was showing up to their bout in Netanya, Israel for Israeli Pro Wrestling Association as The Black Machismo.  That to Starr, that gimmick was akin to spitting in Starr’s face.

He then ran down Ring of Honor for putting the “…little Jew boy” in the ROH World title match for good publicity in Israel, before putting his eyes on Sinclair Broadcasting; calling them a “…right wing extremist corporate propaganda machine.”

For clarity, here’s what he said in full;

Ring of Honor wrestling is a stalwart of pure, professional wrestling in an industry that is monopolized by ‘sports entertainment.’ Their standard bearer Jay Lethal is the man I’m wrestling. But no, I’m not wrestling you, am I Jay? I’m wrestling Black Machismo. Why don’t you just do it, Jay? Why don’t you just spit in my face? Why don’t you just disrespect me? That is absolutely a complete and total joke. Something else that’s a joke is that Ring of Honor wrestling used to represent pure Independent professional wrestler, instead of representing a far right wing extremist corporate propaganda machine. Did you think it was some kind of cute publicity stunt, to let the little Jew boy get a flight to Israel to wrestle for your championship? Is that what you thought? I’m not wrestling for your championship because I’m a Jewish kid from Israel. I’m wrestling for your championship because I’m one of the best Independent professional wrestlers on the fucking planet. Sinclair Broadcasting, you think you’re doing me a favor by having me wrestle for your championship in the homeland? Nah. It’s not just the homeland for me because I’m a Jewish man. It’s supposed to be the homeland for everybody. It’s supposed to be a place that we can all seek peace and refuge. It’s supposed to be a place that doesn’t deprive its citizens of basic civil right. But you know what, I’ll take the favor. I’ll take the bone you’re throwing at me. On the morning after April 21st, you’ll have to wake up to your worst nightmare. You’ll have to wake up to the fact that your championship is now represented by a progressive Jew named David Starr.

Reasons why David Starr is the fucking best #792: pic.twitter.com/QIhkWxQzKH

Needless to say, Sinclair was NOT happy over this, and through ROH sent David Starr a message to remove the video from his Twitter channel; to which he did.  Starr revealed that he did so out of respect for IPWA and for fear of ROH pulling the match; which would mean IPWA, who already paid for Lethal’s trip, would be left in the lurch.

So now, with the match set for April 21st, in Israel, news came from Ryan Satin that confirmed certain thoughts.  That ROH was beyond upset with the promo, that Sinclair hated that their politics were brought up and that if the video was not pulled down, they would pull Jay Lethal from the bout out of spite.

Despite ROH and Sinclair Broadcasting not being happy with Starr’s comments, the wrestling world lit up in near unanimous praise for Starr.  Sure, there are always going to be outliers, but the fact that so many fans were so quick to defend, support and applaud Starr really goes to show what the perception of ROH is these days.

As mentioned above, Josh Barnett’s Bloodsport event will feature a main event of Barnett himself taking on Minoru Suzuki.  The event features grappling, MMA and other shoot-fight style wrestlers competing in worked matches in a ring with no ropes.   This includes other matches featuring Dan Severn vs. Frank Mir, Hideki Suzuki vs. Timothy Thatcher and Davey Boy Smith Jr. vs. Killer Kross.

For those of you hoping for a change in the Kurt Angle vs. Baron Corbin match at WrestleMania, sorry to disappoint.  Dave Meltzer of The Wrestling Observer is reporting that Corbin was the pick all along to face Angle, and that there are no plans right no to change the opponent.   Meltzer is under the impression that there’s a possibility John Cena could still be used to replace Corbin but that’s merely a theory from Meltzer, and not a piece of news.

PWInsider is reporting some unique news today.  According to them, Cody Rhodes is trying to trademark out of date WWE/WCW trademarks.  The ones mentioned were Battlebowl, Bunkhouse Stampede, and the most notable; Bash at the Beach.  The filing, by way of WrestleTalk.com, described the filings as;

Quick Hits – John Cena still does not have a WrestleMania opponent after both of his rumored opponents, Samoa Joe (Rey Mysterio) and Kurt Angle (Baron Corbin), got dance partners.  Rey Mysterio filed several trademarks including Greatest Mask of All Time, GMOAT, and Prince Mysterio; a name many believe will be used by his son Dominic.   Dave Meltzer is reporting that Sadie Gibbs has signed with All Elite Wrestling as an in ring competitor.