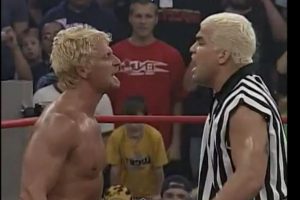 I love all the hate I’m getting here. It baffles me that these people can love wrestling just like I do, but I’m a joke in their eyes. That’s why I’m doing what I’m doing. Eight months of training. Two surgeries, three broken ribs, traveling across the US, getting stiffed by promoters, helping shine a light on talent I believe in that aren’t getting recognized, doing little things I won’t mention to give back to both wrestling and individual wrestlers, and I’m the a–hole? Wrestling is for the people and by the people. I may have grown up in Hollywood, but I’m not some stuck up punk. I had an opportunity to be a part of WCW when I was in my 20’s to travel with some of my heroes in the ring and I took it. I’m done apologizing. Now I just want to kick some ass, so any of you b—— have a problem with me I’ll see you in Tennessee or wherever I’m wrestling and we can settle it like men.

The tweets followed the second reason Arquette is in the news.  The NWA has announced that he’ll be at their Pop Up event in January.  I’m still not sure what makes this a “pop up” event, but sure.  This might be the biggest promotion he’s done work with outside of IMPACT and BCW a few months ago.

We are pleased to announce that @DavidArquette will be appearing and wrestling at #NWAPopUp on January 5, 2019 in Clarksville, TN.

Tickets and a very special meet and greet on sale now https://t.co/yuw3haHbfc pic.twitter.com/gB56h9zSoD

For those wondering, RAW’s ratings were up this week in anticipation of Vince McMahon “shaking” things up.  The show averaged 2.547 million viewers according to ShowBuzzDaily, with the show losing over 400,000 viewers by the end of the night.  While this was expected, the show received at best, tepid reviews.  The show itself didn’t really offer anything new, and in fact magnified the issues with RAW.

MMA Legend Tito Ortiz was on Hannibal TV recently and was asked about if he had any interest in going into the WWE.  While the 43 just re-retired from MMA after finally beating a limping and immobile Chuck Liddell, there have been talks of him fighting again.  However that’s up for debate, but while the future of his MMA career clears up, it’s important to remember that when Ortiz was in the midst of his prime, he was part of then TNA and now IMPACT Wrestling back in 2005, working several pay per view events.  He was then brought back in 2013 as the company tried to appease then Spike TV, now Paramount Network, when Bellator was trying to get going on the network.  So he does have history in pro wrestling . When asked about a potential WWE run, Ortiz said;

Any chance of me going to WWE? I don’t think any of those guys want me to kick their ass, so that’s why they don’t bring me there. But Shane, if you need some work done I can be the man.

Jeff Jarrett is looking at getting back into pro wrestling tours in 2019.  Jarrett’s Global Force Entertainment has partnered with Monopoly Events to bring events to the FITE app, by bringing events to Liverpool in March with Monopoly’s UK Comic Con.  The press release that went out claims
Ric Flair, Bret “Hitman” Hart, Kevin Nash, Scott Hall and “Hacksaw” Jim Duggan.  No matches have been announced just yet.

John Cena's WrestleMania opponent should be a bigger deal

John Cena's WrestleMania opponent should be a bigger deal