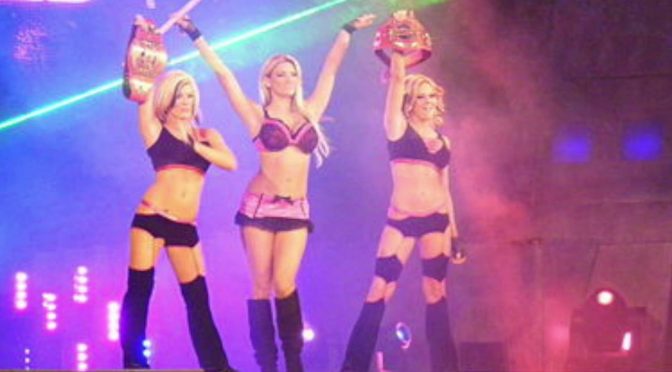 I don’t have a problem with championships or the plethora of titles in a promotion; just as long as they’re used well.  See New Japan Pro Wrestling.  They run shows so often, but rarely repeat the same match up’s or even title defenses.  At least one title per show will be defended most of the time, but it’s rarely the same one.  Which means that when a Heavyweight or Intercontinental Championship gets defended, it’s a big deal.

Title defenses matter more, title matches matter more and by proxy title wins matter more.  If you were to expand on the belts, limit the number of times a month a title can be defended, you’d actually raise the profile due to the exclusivity and rarity of when they’re defended.  Not just anyone gets shots.  Earning these shots now matter more.  It adds a level of depth to the booking.

In order to achieve this however, you need more belts if you’re IMPACT Wrestling.  So here’s my idea for the nine championships that IMPACT could implement;

Knockouts Tag Team
– This one is a no brainer to me.  The roster in the Knockouts Division is as stacked as ever, and has it’s 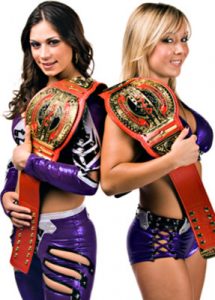 With Alisha Edwards, Allie, Diamante, Katarina, Kiera Hogan, Madison Rayne, Rebel, Rosemary, Sienna, Su Yung, Taya Valkyrie, Tessa Blanchard and possible RISE talent like Shotzi Blackheart, and Delilah Doom, there is a lot of talent on this roster already, plus names like Kimber Lee, Rachel Ellering and others are still on the indies.  the idea of the WWE having a monoploy on top talent is over, and I’m sure most women would love to work for the Knockouts Division and compete for gold

Knockouts Secondary Singles (Phoenix or RISE Championship)
– If RISE does shutter their doors altogether, IMPACT would be wise to pounce and get not just their video library but also their title belt as well. 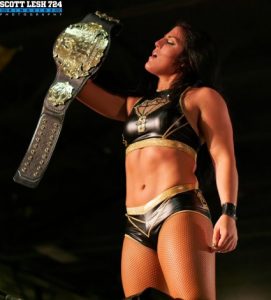 The Phoenix of RISE Championship is pretty spectacular in it’s design.  Obtaining the rights to the belt, as well as preserving a companies legacy is the best case scenario here.

The belt would serve as the secondary title to the Knockouts Championship, and could serve to freshen up feuds and add depth to otherwise bland rivalries.  Think about it, how cool would it be if Jordynne Grace and Tessa Blanchard went to Slammiversary with this type of title on the line?  It’d add more to the match other than just a ‘feud’.

Hardcore Title/Hard10 Title
–  With wrestlers like Pentagon, Sami Callihan, Rosemary, Tommy Dreamer and others who have made a name for themselves in the 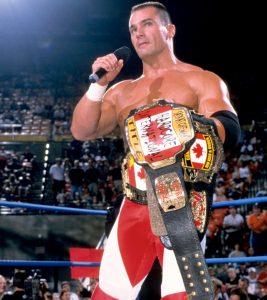 world of hardcore wrestling or stood out in hardcore environments, a hardcore title would be interesting.  They did something back in the day, called the Hard 10 title, (aka the Dupp Cup) but it didn’t catch on.  I think a title, that focuses on brawling and weapons use (not over the top ECW style though), where the only way to win is by a Ten Count, would serve to really offset the stylized division that is the X-Division.

With the Hard 10 Title, you’d have to show toughness, grit, hardcore instincts and be considered a bad ass, because you won’t stay down for anything but a ten count.  Then in the X-Division you can showcase the depth defying action that has since returned to the division.  Plus, the Hard 10 title allows older wrestlers, once thought past their prime, to be able to come in and still be relevant by working a slower paced match.

Legends Championship
– This belt was used once before and was “brought in” by Booker T to decree himself a legend in IMPACT Wrestling.  Most of the guys who won it weren’t considered legends at that point in time.  AJ Styles,, Rob Terry and Eric Young all won the belt before its name change to the Television Championship.

This version of the title would stand to get veterans who have long since aged out of main event roles, a chance to still perform in a division that is designed to showcase just them, and not anyone 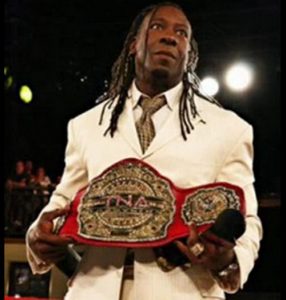 else.  Gone would be the complaints of guys in their late 40’s and early 50’s beating young upstarts who need the rub.  Now it’s a division for those that still can, still want to and still have value to a company.

Think guys like Tommy Dreamer, Scott Steiner, Ken Shamrock, PCO, LA Park and others.  While some would argue that they “take time away from younger wrestlers”, I’d argue the right crop of legends can help sell the product.  There’s a reason why the WWE is leaning so hard on guys like Undertaker, HHH, Goldberg and others over the last few years.  Legends always sell.  Plus, if they’re treated like a specialty offering, keep other division out of their way and you don’t over use the talents in the division, you keep their appeal fresh.

X-Division Tag Team Championship
– While these aren’t my favorite idea, they do offering up a unique option.  I will admit, I prefer the last entry on this list to this option but it is a reasonable idea. 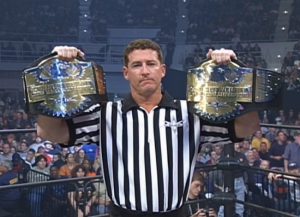 With the X-Division once again flooded with great talent, and more wrestlers than ever it seems with a chance at gold, this would be a solid idea.  The Lucha Brothers, oVe, Jimmy Jacobs, Petey Williams  (or a Team Canada revival), the Desi Hit Squad, among other units, there is already a plethora of great X-Division talent that could raise their profile by competing for the X-Division Tag Team titles.  It’d also free up the regular tag titles ofr other teams to expand their reputation and prestige.

Inter-Gender Tag Team Titles
– Now I’m not saying this is the best idea either, as I’m more open to the 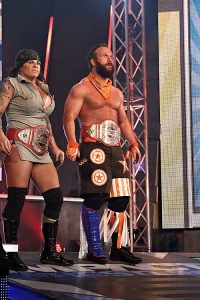 idea of IMPACT adding multiple belts to their lineup (which I’ll address down below), but if IMPACT doesn’t want X-Division or Knockout Tag Team Championships, this is the alternative.

Unique pairings would be the driving force here, like Rosemary and Pentagon, or Scarlett Bordeaux and Fallah Bahh, or even Sami Callihan and Gail Kim.  These would be unique opportunities that would get more people buzzing about specific wrestlers, as you would book it around the idea of personalities that don’t usually interact trying to get along.

Television Championship/Twitch Championship
– Pretty obvious and generic.  Create a title that’ll be only defended on one 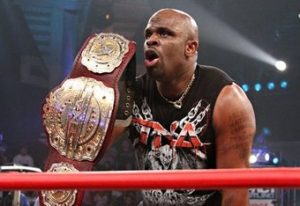 of these outlets.  It’s not the most creative idea but it does get non-division wrestlers a title to fight over that isn’t the World Title.  Guys like Sami Callihan, Fallah Bahh, Moose and others would be the perfect fit here.  Again, it falls along the idea of adding a championship to an otherwise lackluster feud, or to help raise the stakes for a wrestler who’s on the rise.

Gut Check Championship
–  Hulk Hogan and Eric Bischoff’s time in IMPACT Wrestling left a lot of issues, and set the promotion back a literal decade.  Yet, one of the few good ideas 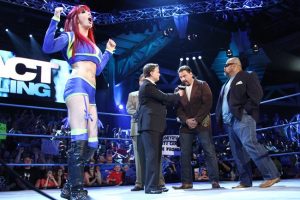 (besides traveling with the t.v. show) was the Gut Check competition.  The issue went array when the Gut Check talent weren’t given opportunity to stretch their legs and just rounded out the bottom of the roster.

So with the partnership with Ohio Valley Wrestling back on the table, this could be a great way to showcase OVW talent in IMPACT every once in a while when you want to showcase young talent.  The belt can be automatically given to them whenever they win the OVW Heavyweight Championship, or independently in order to differ up who to showcase every once in a while.  The belt could also travel to other indy feds, like WrestlePro or another affiliate of the company.  Either way the belt’s whole purpose is to showcase new, young talent.

IMPACT Six Man Tag Team Titles
– This is the belt that I think would work best for the X-Division.  Instead of doing a set of belts for inter-gender wrestling, X-Division and Knockouts 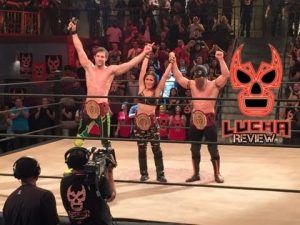 specifically, why not combine everyone into one team of three regardless of gender or division.

This would be similar to the Lucha Underground six-man tag teams, or the Chikara King of Trios concept, where it’s gender, weight and class non-specific.  The action would be intriguing as you’ll get many match up’s you never expected, not too mention the pairings would be wild.  Especially if Pentagon, Su Yung and Rosemary paired up.