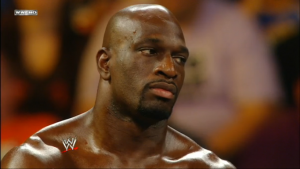 Titus O’Neil Update – Titus O’Neil is the target of a lawsuit in relation to a Swerved season one episode where he allegedly kicked the camera out of cameraman Donald Anderson’s hand during a segment in which WWE stars were shocked with a cattle prod. PWInsider has a new update and more details on the lawsuit.

Thaddeus Bullard (Titus O’Neil) has filed a motion to have the lawsuit thrown out of court because he says the United States District Court of California lacks legal jurisdiction over him. During the filmed segment, Donald Anderson claims that Bullard was shocked by Paige with electricity. This apparently enraged Bullard, who became enraged and went after Anderson, kicking him and injuring his hand, wrist, and fingers to the point he could not work. Anderson’s lawsuit also claims that he was told to leave the scene due to fear that Bullard might attack him again.

Anderson is reportedly suing O’Neil for $1.2 million for Battery, Assault, Willful Misconduct, Negligence, Gross Negligence, Intentional Infliction of Emotional Distress and Negligent Infliction of Emotional Distress. His suit also claims he’s not been able to work since the injury. Titus O’Neil wants the lawsuit moved to Florida or Virginia, where the alleged incident took place. A hearing on the issue is set for October 23 at 2:00 pm in Los Angeles.

News On Former Memphis Wrestling Announcer – According to a post by Dutch Mantell on Twitter, former Memphis Wrestling announcer Lance Russell was hospitalized due to complications from a fall. Mantell revealed that Russell’s daughter also tragically passed away yesterday (Sept. 29). Legendary wrestling announcer, the voice of Memphis Wrestling for decades, Lance Russell, 91, was hospitalized following a fall, it was announced late last night. On behalf of everyone here at Nerdcorp, we not only send our condolences to the Russell family for their loss, but also our best thoughts and wishes for a Russell recovery.

Concussion Lawsuit Update – The plaintiffs on the concussion-related lawsuits against WWE were dealt a setback, as a judge ordered their lawyer to file an amended claim in short order. PWInsider reports that Judge Vanessa L. Bryant in the US District Court of Connecticut ruled that Konstantine Kyros, who is representing dozens of wrestlers against WWE, must file an amended claim within thirty-five days that adheres to “the Federal Rules of Civil Procedure” or they will lose the case.

Kyros has been a controversial figure in the concussion lawsuits. Kyros has represented other wrestlers such as Billy Jack Haynes in similar lawsuits that were dismissed due to the shoddy nature of their arguments and a lack of evidence to back up their claims. WWE has regularly taken aim at Kyros over his tactics during the lawsuit, including the current one in which they said in a statement, “A federal judge has already found that this lawyer made patently false allegations about WWE, and this is more of the same.”

Bryant’s ruling notes that despite previous instructions from the court, the plaintiffs have now “filed a 335 page complaint with 805 paragraphs that includes numerous allegations that a reasonable attorney would know are inaccurate, irrelevant, or frivolous.” These include the filing of a 2015 study on CTE, which would be irrelevant because none of Kyros’ clients were working for WWE at that time, claiming that a female wrestler was told not to report a sexual assault while on a WWE tour, which has nothing to do with her claims about her neurological injuries. Bryant noted that Kyros also used the fictional post-concussion angle between Shawn Michaels and Owen Hart from 1996 as proof that WWE was aware of the dangers of concussions and CTE. CTE was not specifically discovered until 2006.

Each plaintiff must also be asked what any WWE employees said or did that supports the claims in the lawsuit that WWE knew about and hid the effects of concussions. Each claim against WWE must include a reference to the specific paragraph of the complaint, when and where such act occurred or such statement was made, the identities of any and all the persons present at the time of the act or statement, and “any and all other facts personally known to the affiant that form the basis of their belief that WWE or any or its agents or affiliates knew or should have known that wrestling caused any traumatic brain injuries, including CTE.” Should this not happen, Judge Bryant warned that she will dismiss the lawsuits against WWE with prejudice.