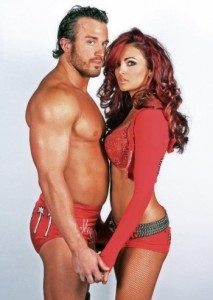 Cesaro Injury Update – As seen last night at No Mercy, Cesrao suffered a upper mandible injury when he collided with the turnbuckle last night. The turnbuckle, which is the steel piece that links the corner to the post, has a small, yet open metallic center that is widely as being regarded as the reason for the injury. The injury wasn’t as simple as Cesaro knocking out two front teeth, but he actually embedded both of his teeth INTO his mouth. He’ll need them removed, and will have fake teeth put in. The damage was considered severe, though not life threatening.

Where Did the Bennett-Kanellis’ Go? – For weeks we’ve speculated that Mike and Maria Bennett-Kanellis got yanked from the road due to Mike being open about his addiction issues. However, thankfully, Maria revealed today that wasn’t the case. Apparently Maria followed suit with Maryse, and is now expecting a baby with her husband Mike. No word yet on if Mike will return to the road, but considering he and Maria are very much a duo, it’d be harder to have Mike come back without her, as opposed to the Miz, who had a long run before ever being paired up with his wife.

Quick Hits – Former WWE Wrestler, Celeste Bonin (Kaitlyn) is training for a return to the ring. No word if it’s a full time return, or merely some sort of cardio exercise routine. Congratulations go out to Jim Cornette, he celebrates 35 years in wrestling today. Samu and Snitsky are in a new horror film called “100 Acres of Hell”, which will begin its festival run this Sunday in Philadelphia at the Proscenium Theater at the Drake. Jeff Hardy to undergo surgery next week to repair his shoulder.