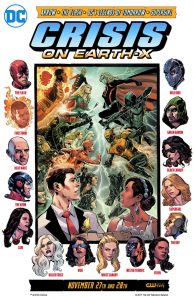 Arrowverse’s Crossover – “Crisis on Earth-X” is coming to the Arrowverse. The crossover, centered around The Ray’s animated series, will come to live action this fall. This is a throwback to the pre-Crisis-on-Infinite-Earths Earth X. That universe featured a United States that lost World War II, and had heroes like Plastic Man, Uncle Sam, Phantom Lady, The Ray and more. So CW is bringing that universe to not only the animated world on CW Seed service, but now to the main universe on the live action side. It’ll feature the main universe heroes teaming up with Supergirl and The Ray to take on the villainous Earth-X villains, who will resemble the heroes of the CW universe. Phil Jimenez added more to the plot saying;

With all of the heroes in town to celebrate Barry and Iris’s wedding, villains from Earth-X crash the festivities with a deadly agenda.

We conceived this year’s crossover to be evocative of the annual Justice League/Justice Society crossovers we grew up with and looked forward to as kids. Phil was the perfect choice to bring the comic book cover iteration of this idea to life. You can count on one hand the number of artists who could compellingly represent so many characters in a single image. Phil is one of them. And his design invokes the cover of Justice League #207, which was the 20th annual JLA/JSA crossover. Our 10-year-old selves are in heaven.

Who’s Playing The Ray? – Russell Tovey has been cast as Raymond Terrill, aka Ray. Here’s the official press release;

Raymond ‘Ray’ Terrill was a reporter who discovered a group of government scientists working on a secret project to turn light into a weapon of mass destruction. But before he could report on his findings, the project head exposed Ray to a ‘genetic light bomb.’ The bomb failed to kill him and instead gifted Ray with light-based powers. With these abilities, Ray realized he could go beyond reporting on injustice — he could take action to help stop it. Calling himself The Ray, he was recruited by Uncle Sam and the Freedom Fighters to fight violence and oppression wherever it exists.

Quick Hits – Jesse Eisenberg’s Lex Luthor, and Kiersey Clemon’s Iris West have been cut from “Justice League” according to various reports. Matthew Vaughn wants to do a “Fantastic Four” film, where he’ll “…try and rectify the mistake” which were the former movies.