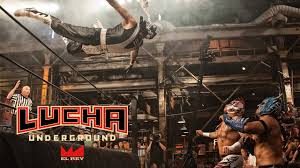 Oh I’ve had a productive day. Working out, banking some columns, and working on the blogs. A hell of a day in deed. Lets hop into the world of wrestling.

Lucha Underground Update – According to Pro Wrestling Unlimited, Lucha Underground stars, none of which were named, have been purposely violating their contracts in the hopes of either getting released, or gaining the attention of someone in the office so they can be notified about season four. The current mood with the talents is that many are unhappy and want out, because unless they’re signed with AAA as well, they’re not able to work anywhere else in the U.S. who might have t.v. deals. Drago, King Cuerno, Johnny Mundo and Taya Valkyrie all have contracts with AAA, so they’re able to work in GFW because of that.

I’ve heard that this is in fact the case for at least a couple of the names. Many thought that Lucha Underground would be a saving grace for indy wrestlers to further build their brand, but when that ended up not being the case, causing a lot of issues with bookings, it took a bad turn. Who knows how much of this will end up being true when it’s said and done, but according to Pro Wrestling Unlimited, the issue right now is that Lucha Underground is in deep trouble; due to El Rey not wanting to pony up the cash for the show anymore, despite a desire to still keep airing it.

Opinion: With the rumors around GFW and Lucha Underground, it really doesn’t look good for pro wrestling in the United States.

GFW Conference Call – The folks at GFW had a conference call today with John Gaburick, Scott D’Amore, and Sonjay Dutt. The tone was a little somber, but all three were apparently looking forward to continuing GFW without Jeff Jarrett. They shot down the sales rumors, referring to Ed Nordholm’s statements previously. It was also revealed that Alberto El Patron will be back for Bound for Glory and beyond. Among the talk of BFG, it was stated that Rey Mysterio was never in the plans.

In regards to the Sexy Star/Rosemary situation, there would be no further mention of the incident on television. Apparently that was Jeff Jarrett’s decision, and part of the reason he was removed (though that was not stated on the conference call, but to me independently). Apparently the folks at GFW don’t like making their affiliates look bad by association, or through embarrassment, which Jarrett seemingly did both of when he tried to confront folks from AAA after his match.

Opinion: It’s becoming harder and harder to tell who to believe. The S.I. article was written by a man who was using former employees, which he even claims in an post article interview. However, Dave Meltzer notes that despite him not hearing anything, in the past with the sales of companies, it’s never really something that gets out there all that much, and is kept close to the vest.

Quick Hits – Bram posts a long note on Twitter defending himself against past accusations, which despite never being charged or found guilty, have kept him from getting work in his native U.K. Rosemary has been cleared to return to the ring after only a few weeks out with an injury. Auska is heading to RAW due to the lack of depth for their women’s division. Raw had a poor attendance last night, which is becoming more of a trend. Vince McMahon has been added to WWE 2k18.