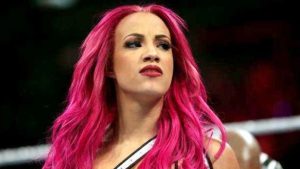 Hello everyone and welcome to today’s edition of The News!! This is the day where I bring you all of the wrestling news you will ever need for your Sunday night. Why would you ever want to go through many websites, searching through various articles when all the news you need is here, on the best website, the top website, the number one website and quite frankly, the only website you will ever need, NerdCorp. Enough nonsense, let’s just get to the news shall we?!?!

Sasha Banks Update – Channel 24 in Africa ran a story about WWE’s popularity, including the recent Summerslam weekend. There was also a story from a fan in which they mentioned that Sasha Banks was rude to her 10-year-old sister. The fan, 17-year-old Cerina Leone, said her sister asked Sasha for an autograph and was ignored. The little girl then mentioned something about Charlotte beating her, and Sasha reportedly called her a “little bitch” under her breath, which the girl’s mother heard. What’s your take on the whole situation and with the recent stories about Sasha and fans as of late? Do you agree with Sasha’s look on things, is she being too mean? or not? Let me know your thoughts in the comments below.

Samoa Joe Speaks – The USA Today For the Win section spoke with WWE Superstar Samoa Joe. He discussed Brock Lesnar’s part-time schedule, despite Lesnar being WWE Universal champion, comparing it to someone like Hulk Hogan and his title runs. Here is what he had to say…

“You go to the Hulk Hogan era reigns, and I definitely didn’t see him on TV every week. There is a mystique to him not being on TV that much. When he does make appearances, it’s usually for purposeful reasons. That’s been the big theme for Brock. You hear he’s not here, but if you look back at the shows, he’s here when it counts and when I need to get my hands on him. As long as that still happens, I’m good with that.”

Christy Hemme Update – Former WWE Diva and TNA Knockout, Christy Hemme, announced today in a new video that she is pregnant and expecting quadruplets. She said she has

She added, “I am so excited you guys. I am like, beyond excited. I am also scared and petrified and oh, every emotion in the book.” She also revealed being 15 weeks pregnant and due to her situation and it being a high-risk pregnancy, she plans to spend most of her pregnancy either on bed rest or in a hospital. On behalf of everyone here at NerdCorp, we congratulate Christ Hemme on her pregnancy.

“Even coming in to going to developmental, my end goal and the place I always wanted to be was Japan still, so I went into developmental wishing I could be in Japan or at least having experienced that first. Looking back at it now, maybe I wasn’t mature enough or I couldn’t… I mean, I loved wrestling and it was such a passion of mine to… and I mean the artistic and creative part of wrestling and actually the act of doing it. I didn’t love the business part of it, if that makes sense.”