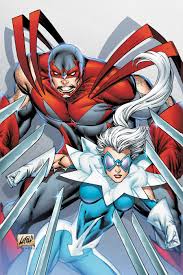 Yes, there was no ComicCorp yesterday. Yes, it had a lot to do with rumors, but also a lack of news. So here ya go.

Titans Find Their Hawk and Dove – After only a week of reporting about Alan Ritchson joining the show in an unofficial manner as Hawk, it can now be reported that rumor is true. However, his rumored sister is not coming wiht. Rebecca Rittenhouse was expected to play Dove, but she’s since been replaced with Minka Kelly. Rittenhouse was younger than Ritchson, while Kelly is nearly a decade older than Rittenhouse, so it might be that Dove will be the older of the two after all. However, Kelly is also very youthful looking for being 37, so who’s to say. They now join Brenton Thwaites (Dick Grayson), Anna Diop (Starfire), and Teagan Croft (Raven).

Opinion: The casting for this series age wise has been so wonky it’s almost impossible to understand what they’re doing.

Opinion: ‘I did it for the money.’

Quick Hits – “Dark Mirrors” fourth season will have a cast and crew episode similar to “Star Trek”. “It’s” sequel has began production, ahead of the premiere of the first film. Barry and Iris will tie the knot in season four of “The Flash”. Black Panther toys reveal that “Black Panther” will follow the same origin story movie as “Iron Man” and “Ant-Man”, with the villain getting the same type of suit the hero got. Hurray for the same shit.