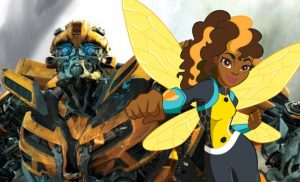 After a little bit of a break in between news posts, we’re here to get things going.

Transformers Suing DC? – Hasbro, the owners of the Transformers franchise, is suing DC Comics over their character Bumblebee, who is a young black woman, with the powers of…well… a bee. They’re contending the character and name infringes on the rights of their character named Bumblebee….Which is a yellow car, that transforms into a robot. Why Hasbro is having a hard time differentiating between a young and plucky black girl, and a yellow automobile is something you should ask them. It all comes down to toys. Both are named Bumblebee, and that upsets Hasbro. Needless to say that DC’s Bumblebee was created in 1977, as opposed to the 1983 character. But whatever.

New ‘Daredevil’ Villain? – Daredevil will be facing off with a new foe in his third season, and he’s being dubbed ‘Steve’. Here’s the character description;

The Hashtag Show contends that this may be Stanley Carter, known as Sin-Eater. Considering the third season of “Daredevil” will center around his reunion with his mother, and her status as a nun, it makes sense to go heavy with the religious iconography.

Preacher Update – Despite a second season of “Preacher” once being thought of as a long shot, AMC seems ready to not only announce season three, but they’ve also picked their shooting location, which is still in New Orleans. The show has received some controversy this season, as they’ve upped the ante and even though some may think this is AMC’s fault, it’s not. The book was this outrageous. Actually, I lied. It wasn’t. It was more. Be glad folks, this is a “water downed” version of the book.

Quick Hits – Justice League and Warner Bros. adds Joss Whedon to the writing credits of the film. ‘Inhumans’ get a better trailer ahead of their fall debut.