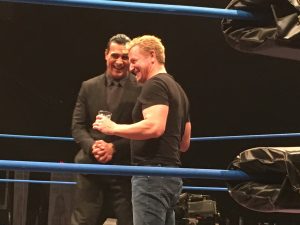 Welcome back to the world of pro wrestling. Where the action is real, the outcome is fake and nothing matters. So, lets get to it.

El Patron Back to TV? – Alberto El Patron is expected to be done with Global Force Wrestling already, and to add to this speculation, Patron will be appearing on Championship Wrestling from Hollywood. While other wrestlers have appeared on programs, they did so in good standing. Patron haven’t shown up anywhere for a while and was completely left off of this last set of tapings. It’s also clear that Patron won’t be on Bound For Glory at all.

Opinion – Patron appearing on CWFH isn’t a big to do, but him appearing on there while not appearing on t.v. and being left off of Bound for Glory, is a clear sign that GFW doesn’t intend on bringing him back.

John Cena Update – It’s being reported that John Cena’s stint on RAW is a minor one, and is only being done to help bridge the gap between Lesnar’s next two matches. Apparently Lesnar won’t be on RAW past No Mercy for the rest of 2017, and won’t return until the Royal Rumble at the earliest. Cena will feud with Reigns for the interim, when at the point where the WWE is comfortable with RAW, send Cena back to SmackDown to take the belt off of Jinder Mahal. Also, Cena himself will be taking a small break in the fall as well to film his next movie, upon his return it’ll be for SmackDown.

Opinion – Cena as champ is fine, but I think most of us would rather see him earn that 17th at WrestleMania, as WrestleMania has been lacking in major moments recently.

Joe’s Injury – Samoa Joe is injured after working a house show loop this past weekend. He was expected to face off with John Cena last night but due to a knee injury, was pulled. Joe’s expected to be out four plus weeks. No word yet on Xavier Woods injury.

Quick Hits – Ric Flair to begin rehab and therapy following surgery. Santino Marella came out of retirement to perform one last time before announcing that he’s now wrestled his last match ever. Nakamura and Orton are expected to take on Rusev and Mahal tonight. Kurt Angle claims he’ll wrestle again.