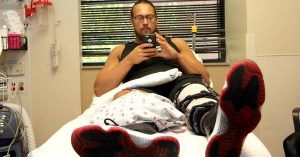 Big Cass Update – As we all know by now, WWE Superstar Big Cass was recently injured on Raw this week, and he had to undergo surgery a short time after. WWE shared a photo of Big Cass on Twitter, showing him recovering after his surgery, which can be seen aboev.

Big Cass was diagnosed with a torn ACL, and he’s expected to be out for as long as nine months. Per WWE.com, Big Cass is now in rehab after undergoing his surgery. On behalf of everyone here at NerdCorp, we wish Big Cass the best in his recovery.

Kurt Angle Update – Newsday recently interviewed Kurt Angle, who talked about advice he received from Ric Flair before he got into the wrestling business. Here is what he had to say…

“Ric was the guy that I got advice from before I started in the business. He’s the one that redirected me from [World Championship Wrestling] to WWE, told me Vince McMahon would know what to do with me, and said not to go to WCW.”

“…But what I learned from Ric was how to give to the business and not take. He always made sure his opponent looked better than he did. What was important to him was the match, not himself, and I took that advice and made sure when I performed in the ring I made my opponent looked better than me, and I made sure it was the best match I could possibly make it. He was a very giving wrestler, and I did the same because of Ric Flair.”

Drew McIntyre Speaks – The Edge and Christian Pod of Awesomeness recently interviewed new NXT world champion Drew McIntyre on a multitude of subjects. Here is what he said about growing as a performer after WWE and also trying hard in WWE…

“I’ve been fantastic. I don’t even know where to begin. It [has] been a few years. I think I’ve grown up a little bit and I’ve been away from the WWE for about three years and I kind of did my own thing. And thanks to everything that I’ve learned from being on the road with guys like yourselves and the roster that we had at the time and I’ve been able to take those lessons and apply them all across the world and build my name. It was the right time to come back and I’m back.”

“Coming in when I was 21 [years old] straight from university and coming to America, you’re growing up in the company and you’re in the bubble so long the idea of being outside is a little terrifying, but once I got that chance, that’s when I was able to say, ‘alright, it’s time to put up or shut up.’ It’s the only thing I’ve known. It’s the only job I’ve had and I want to see if I could make something happen. Thankfully, I was able to apply everything I did learn that way. And like I said, I grew up a lot as a performer and as a man.”

“I was trying too hard. Like, I wasn’t able to relax back then. That’s another thing and guys, you know, once you’re able to relax, that’s when things start clicking and people can feel that as well. I just wasn’t relaxed at all for my whole first run. I was on-edge that whole time, trying too hard.”