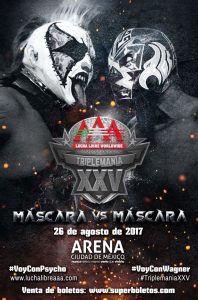 So not a lot of news today but two pretty big stories. I also want to take a moment and point out that sometime in the next two weeks or so, we’ll be switching over to a different set up for our podcasts as we’ll probably be going with Podbean for all future shows.

Top GFW Name Gone – And this is why you don’t put the title on Low Ki. Low Ki has already asked for and was granted his release from GFW, and the reliable sources are claiming it’s due to his unhappiness with his post El Patron feud plans. This would be Low Ki’s fourth stint with GFW that ended with him asking for his release.

Opinion: After this run, where he was booked well, but lost his spot in part due to the man they opted to go with as their new world champion (a great choice by the way), it’s baffling to think they’ll ever bringg Low Ki back. Why? You know he’s a prima-donna, so don’t bother.

TripelMania on the Internet? – Despite the failure that was their attempt at tackling the United States PPV market, AAA has decided to try again, this time broadcasting TripleMania XXV on Twitch. Twitch is gaining steam as of late for their alternate outlet for pro wrestling shows. AAA becomes, arguably, the biggest pro wrestling company to use the streaming service for their shows. Here’s the release;

The Triplemania pre-show marathon on Twitch starts on August 24 at 3:00 p.m. PDT, with the live broadcast of Triplemania XXV beginning on August 26 from 5:00 p.m.-10:00 p.m. PDT. During the stream, viewers will find emotes themed after the event and various wrestlers enabling them to show their support in chat.

“We are very excited by the reaction of our fans to the “match of the decade” between Dr. Wagner Jr. and Psycho Clown,” said Dorian Roldán, Vice President of Lucha Libre AAA Worldwide commented. “This is why we decided to partner with Twitch to livestream Triplemania XXV exclusively on their platform and mobile applications. Since we both share a passion to innovate, we look forward to having Twitch broadcast our show around the world.”

The partnership with AAA Worldwide is the latest in a growing movement of professional wrestling circuits streaming their content on Twitch. The trend began when wrestling fans urged their favorite organizations to bring their shows to Twitch. By embracing wrestling, it reflects Twitch’s growing commitment to emerging content that has surfaced from its gaming community.

“We have recently seen the Twitch community rally around wrestling content since the sport is also entertainment-driven with engaging personalities and supported by passionate fans,” said Emmett Shear, CEO at Twitch. “With AAA Worldwide being among the industry’s biggest wrestling organizations and lucha libre holding a special place in pop culture, our involvement with Triplemania XXV marks a fun and fascinating milestone.”

“The most significant part of this event is we are combining the rich tradition and heritage of Mexican lucha libre with the digital engagement and participation of the Twitch experience,”?adds Christian Borneman, Director Latin America, Twitch??. “By livestreaming this amazing content to fans worldwide, we are providing a new way to engage with one of LATAM’s most unique and compelling cultural offerings.”

Twitch is the world’s leading social video platform and community for gamers. Each day, millions of community members gather to watch, talk, and chat about shared interests. Twitch’s video platform is the backbone of both live and on-demand distribution for all types of content, including the entire video game ecosystem, the creative arts, vlogging (IRL), and more. Twitch also runsTwitchCon, an annual convention for celebrating the Twitch community. For more information about Twitch, visit our Press Center, Twitter feed (#Twitch), and Blog.

Lucha Libre AAA (www.LuchaLibreAAA.com) is a media and entertainment Company founded in 1992 by Antonio Pena Herrada and manages the IP of the “AAA” brand and another 250 characters in its league. The company produces Lucha Libre events globally including venues such as Palacio de los Deportes, Arena Monterrey, HP Pavilion, Madison Square Garden, Los Angeles Sports Arena and Korakuen Hall in Tokyo, Japan. In addition to working with sponsors such as Corona, Comex, Roshfrans and Boing, the league has released an animated movie and videogame in the Mexican market. The company is headquartered in Mexico City.

Opinion: With Johnny Impact, Texano, Pagano and other top names on the show, it should be worth checking out and GFW fans will recognize at least thirteen names. AAA has a large contingent of former GFW talent (El Mesias/Hernandez), as well as the crossover stars, (Drago/Fantasma), and even GFW talent like Moose and Johnny Impact. As a special treat, Jeff Jarrett will be involved in a major trio match.
You can go to the AAA Twitch Stream for English at https://www.twitch.tv/luchalibreaaa_en As of right now, it’s presumed to be free to watch.

Enzo to 205Live? – After weeks of speculation, Enzo Amaore finally moved over to 205Live. However, I’m hearing there is some major plans set for Enzo. Not only does the WWE want to keep Neville at the top of the card, but the current plan is to see how Enzo fairs in a major solo feud, where he’s not booked as a punching bag. There are some arguing to see Enzo with the Cruiserweight title, but that is currently the topic of much debate.

I’d been doing it for 14 years when I retired and I felt it was my time. A lot of wrestlers will wrestle until they’re 50 or 60. I didn’t want to not be able to walk and play with my kids. I escaped any serious injuries. My last match was against Chris Sabin, I enjoyed it and it was awesome, and it was the perfect note to leave on.

On Things Changing Since He Retired;

If you look at the guys I was in the mix with at the time look where they are now. AJ Styles, [Samoa] Joe they’re headlining Raw, Smackdown, PPV’s. My former two Team Canada members Bobby Roode and Eric Young. Ah maybe I retired a couple years too early but I enjoy where I’m at now today and I hope I could re-ignite that now where I left off.

I got released from TNA in 2009 and then came back for a short stint in 2013. I really didn’t like what they did with me in that run. It was all 3-way matches. There was no story.

I don’t know if TNA and WWE had a lawsuit but they [WWE] were not interested. They didn’t want to touch anybody that was related to TNA. Even in 2014 when I retired they didn’t want to touch anybody. It seemed like right after I retired they started to pick up everybody from TNA. And they weren’t burying them; they were pushing them and making them top guys. Maybe I did retire a little too early.

You can tell and I wholeheartedly believe this. The main roster and NXT you see that former X Division style. In the early 2000’s you didn’t realize that TNA was creating a revolution. You didn’t realize that you would look back at the talent that was there that changed wrestling. But that’s exactly what happened.

What He Missed Most;

I missed the boys. I had been under contract with TNA for 5 years. I had traveled with these guys every weekend, rooming with them; you see them more than your own family. I remember when we got the deal with Fox Sports Net, and started filming in Orlando. All of us as unit we were all excited to move forward. As more WWE guys started coming in, you felt that kind of dissipate a little bit but you still had your core guys that you started with and felt like a family with them. You’re living the dream. Then you get a call one day that your dream that you’ve been living and that you’ve worked for your entire life gets ripped away from you for no apparent reason. And guess what you’re not going to see your friends anymore because you’re not going down there and traveling with them. That’s the biggest thing that I missed about wrestling.

Quick Hist – Dana Brooke has started a fundraiser for her departed boyfriend; if you wish you to donate you can do so by clicking this sentence. Rory Gulak, Drew Gulak’s younger brother, appeared on 205Live as a clown. Bobby Roode debuts for SmackDown after execs had him slated for a RAW debut the night prior.