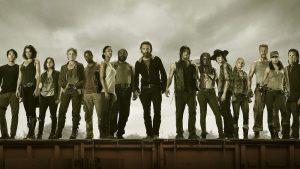 There wasn’t much stuff today, so that’s why it’s barebones.

AMC Gets Sued – “The Walking Dead” franchise creator Robert Kirkman and television producers Gale Anne Hurd, Glen Mazzara, Charles Eglee and David Alpert have all sued AMC claiming that the t.v. company has failed to live up to contractual obligations to pay the creative team a certain amount. This includes the names mentioned and those who work under them. The complaint reads;

This case arises from a major entertainment conglomerate’s failure to honor its contractual obligations to the creative people — the ‘talent,’ in industry jargon — behind the wildly successful, and hugely profitable, long-running television series The Walking Dead. The defendant AMC Entities exploited their vertically-integrated corporate structure to combine both the production and the exhibition of TWD, which allowed AMC to keep the lion’s share of the series’ enormous profits for itself and not share it with the Plaintiffs, as required by their contracts.

AMC has called these claims “baseless”.

Opinion: When EVERYONE is in on the lawsuit, you done fucked up somewhere. This may lead to the show getting axed sooner rather than later.