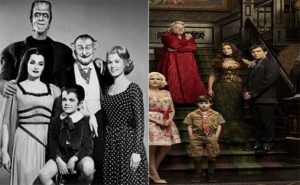 This is it, then the elusive thing known as sleep will be mine…

Munsters Reboot in the Work – Deadline is reporting that NBC is developing The Munsters with Seth Myers and Jill Kargman as producers. The show will move their location from the suburb of Mockingbird Heights, California to Brooklyn, New York; and yes, a key component of the new franchise is how the Munsters deal with the hipster community of Brooklyn.

Opinion: FUCK. SETH. MYERS. This show already sounds fucking awful. 1) No one likes hipsters, not even to make fun of. 2) The show will be a generic modern comedy just like the rest of the failed NBC pilots. 3) The Munsters were a sign of their time. If the expertly made reboot in 2012 didn’t work, this won’t either. Fact:: 4) Seth Myers is awful.

Kirkman Working With Amazon – Amazon Studios has agreed to a deal with Walking Dead creator Robert Kirkman to develop his Skybound Entertainment properties into television and movies. This opens up Amazon to the likes of “Invincible”, “Witch Doctor”, “Manifest”, and others.

At Skybound Entertainment we strive to tell the best stories in the most unique and creative ways in an effort to always break new ground. A forward-thinking company like Amazon is the perfect home for us. Their new foray into genre fiction has us at peak optimism for what can be accomplished during this unprecedented partnership.

Opinion: With Disney pulling their content from Netflix, Netflix acquiring Millarworld, and the fact that these major platforms will also lose the DC shows soon enough, it’s not that surprising everyone is scrambling for new properties. “Invincible” could make Amazon a player.

Justice League Reshoot’s Reasoning – According to Joe Morton, whose famous for his roles in “Terminator 2” and “Eureka”, the “Justice League” re-shoots were done to help lighten the tone of the film. When asked about it, Morton said;

Well, the stuff that I had to do were just really small little bits and pieces, nothing necessarily having to do with tone. I know that with Ray [Fisher], the young man who plays Victor, there were some adjustments that they made in terms of the tone of that character.

Opinion: I’m not sure how I feel about this. I like the darker tones. It felt real, with serious consequences. Unlike OTHER movie franchises.