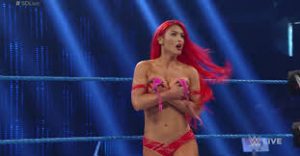 Sorry for the lateness of the post. Alex is off for the weekend, due to him not having internet this week. So this was on me.

Why Y2J Returned for One Night – Chris Jericho’s return to SmackDown a few weeks ago wasn’t meant as a return, but as a one off and apparently it was simply convenience. Jericho showed up to interview the Fashion Police for his podcast, as well as shoot his role for the Southpaw Regional Wrestling show. He was essentially roped into working the match.

Opinion: SRW is weak. The End.

Eva Marie on Starting Too Soon – Eva Marie talked to Rolling Stone recently and revealed that a return to the WWE is always open but much like The Rock found out, you can’t be 100% all in with wrestling and 100% all in with pro wrestling. Since you need to be with both, she opted to try her hand at acting. As for if she was called up too soon, she said;

You know what? Yes. For sure, the inner athlete and perfectionist in me wishes I was able to train the multiple years these wrestlers are able to before they get on TV. However, if that opportunity never came up, then I would not have been put in front of the WWE universe, dyed my hair, been put in front of my [management] team. Everything happens for a reason. For me, it all played out pretty damn good.

Opinion: I applaud her honesty. They should of never called her up until she was ready. It hurt her career.

If I was signed in 2012, like Arn Anderson, that day I did the tryout match, had said, ‘if it was up to me, you’d be on TV tonight. I don’t know, I’d have you be Santino’s cousin. I don’t know, but I’d put you out there tonight.’ I think if they had signed me right then and there, I would’ve been fine. I think if I had gone to NXT, and I had gone to TV right away, I would’ve been fine. I think by the time we actually did anything, the lustre of the new toy had worn off so much that I was just another guy in the system.

Quick Hits: Tetsuya Naito defeated Hiroshi Tanahashi to win the Block A of the G1 Climax. IMPACT Wrestling rises in ratings this week. GFW expected to land new German TV deal. Al Snow believes that Vince McMahon wants all of his wrestlers to succeed, despite what we all know is the contrary.