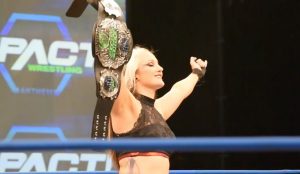 There is barely any news worth talking about, so…yeah. This is the best we got today.

GFW Talent Slams Fan – Sienna is having none of your shit. The Unified Knockouts Champion took to Twitter today to slam people for believing everything they read in dirtsheets in regards to talents pay. Here are the two best tweets she threw out there. The whole thing really started when a “fan” tried to dog her out for GFW allegedly taking 10% of their pay. However, that’s not the case, as Sienna claims and that her contract does not state that.

Nah, you just meant to feel entitled to private financial matters more than caring about actual wrestling. This 👏🏼 is 👏🏼 the 👏🏼 prob👏🏼 lem👏🏼 https://t.co/guxuu17I6C

Smark isn't even a thing. You can't be smart and a mark. You can be a mere regurgitating sheep though. https://t.co/qnBu9EobcI

El Patron Update – According to PWInsider, Alberto El Patron is expected back for Destination X next week, after being kept off the live events from this past weekend. However, despite being cleared by Orlando P.D., there is some in GFW that want the belt off of El Patron at the event, so we’ll see if Patron is still being pushed as the ‘face’ despite not being very reliable.

Disc 1 contains the top moments in Survivor Series history i

Triple Threat Match for the WWE Championship
Triple H vs. The Rock vs. The Big Show
Survivor Series • November 14, 1999