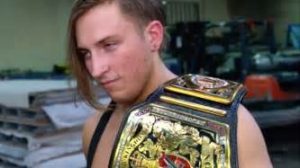 Pete Dunne Update – WWE announced that WWE UK Champion Pete Dunne successfully retained his WWE UK Title at today’s ICW Shug’s Hoose Party 4 event, defeating Trent Seven, Wolfgang and BT Gunn. The event will be available in 24-hours on ICW’s on-demand service. They then posted the question of who would be next to challenge the Bruiserweight.

According to the report, Khali and Jericho are not currently advertised for any WWE events going forward, and that includes both television and live events. Khali’s status is reportedly unclear. Since WWE is trying to build up Jinder Mahal to help increase the company’s business in India, it’s expected that Kahli could be used in a similar capacity due to his huge star power in the country.

Ricky Romero Update – In a Periscope post, NJPW star Rocky Romero said that he is not retiring from in-ring competition. However, he added that he’s done with the IWGP Junior Heavyweight Tag Team Division. Here is what he had to say…

“Yes, I am retiring, and no, I’m not retiring. Yes, I’m going to be retiring from active competition in the Jr. Heavyweight Tag Team Division. I’m done with it, I mean, how could I get another tag team partner after Trent? He’s the man. It’s been crazy, this week, whenever I think about the moment we had two weeks ago at the G1 Special, it’s just like crazy. I get all teary eyed. Don’t make fun of me! Yeah, I’m done with the Tag Team Division – the Jr. Tag Team Division, I’m done with it. Yeah, I’m retiring from that division, but am I retiring from wrestling? Hell no! I feel like I’ve got a lot left in me, I’m 34-years-old, yes I’ve been wrestling for 18 or 19 years, something like that, but I am still not done. I still got a hell of a run left in me, whether it will be a singles run, I’m not sure yet. That’s something I definitely want to do before I am done, my contract, yes, is up in January of 2018. But, New Japan is my home and at this moment right now I plan on staying with them and being a part of the growth in the USA – and all over the world. So yeah, lets just dispel those rumors about me retiring from wrestling, cause that ain’t happening anytime soon. Yeah, I will be taking a step back for a second and working on other projects, I got a web series I’m working on, we’re shooting the pilot right now, it’s called Chico The Luchador. I’m gonna try to get it out.”