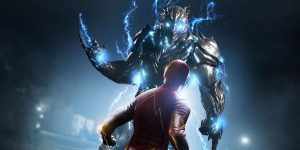 Just with WrestleCorp, ComicCorp is late tonight due to the lack of relevant news. So here we go.

Tom Felton Returning? – As of right now, sources are saying that Tom Felton won’t return as a series regular for the fourth season of “The Flash”. No reason is given or hinted at, but it could be due to contract disputes, maybe the crew wanting to move on from the character, or any other various reasons.

Captain Marvel’s Infinity Debut? – Many have assumed that Captain Marvel would be debuting in the 3rd Avenger’s film, “Infinity War”. Co-Director Joe Russo have since shot those rumors down though, stating that she won’t be in the upcoming film.

Kevin Conroy Picks His Favorite Batman Actor – Kevin Conroy is, to most of us, the voice of Batman. The actor has been portraying the character since the early 90’s, and continues to this day to reprise his role. When asked though about the live-action adaptations, Conroy did not mince words, saying;

You know, I thought it was weird when Warner Bros. didn’t give the franchise to one actor when the first started doing the films. You just assumed they were going to cast a Batman and he was going to carry the whole franchise. But then when I saw the different ones — Michael Keaton and Val Kilmer, [George Clooney], and Christian Bale — all the different takes, this was really smart, because each actor does it so differently. And I love seeing all the different takes. I think some of them get Bruce Wayne more than they get Batman, and some of them get Batman more than they get Bruce Wayne. I think Ben Affleck has probably gotten the best balance of the two. He’s a really good Bruce Wayne and a really good Batman.

Quick Hits – Drago confirmed for “Creed II”. Jeph Loeb doesn’t know if there’ll be a second season for the Defenders. Simpsons creator Matt Goening to have a 20 episode season for new animated project “Disenchantment” on Netflix next year. Jared Leto is being eyed to play Deadshot in Sony’s adaptation of the comic of the same name.