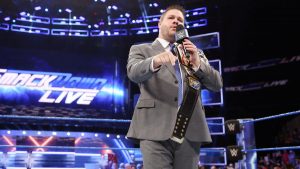 Apologizes for the lateness of the news today, but as it was a slow news day on both ends, I opted to hold off until more things came out. So let’s get into this.

Battleground Ending Botched? – The ending to the AJ Styles and Kevin Owens match was apparently changed during the beginning of the match. The ending, with Kevin Owens regaining the United States championship once again, was always the plan just not how it was originally booked. There was some belief that AJ Styles was legitimately angry over the finish, as he was not seen on any screen of sorts for the rest of the night, and took a while to leave the ring, as he was visibly upset. Whether it was a work or not is not known at this time.

Al Snow on Getting Let Go From GFW – While Shane Helms, Matt Hardy and his wife Reby want to constantly slam GFW, others have not. Maria Kanellis and Mike Bennett didn’t slam the company on the way out, Drew Galloway was appreciative of his time, as were Davey Richards and Matt Morgan. Al Snow was part of the previous crew that was let go, alongside Shane Helms and Pat Kenny. When asked about Snow’s firing, Al Snow responded very respectively, saying;

All I can tell you is this, was it financially driven? I would have to assume it was. You only have so many spots for whatever number of agents you have. This has happened throughout my entire career. It always does. A new broom comes in, they bring in new guys and then the old ones get swept away. That’s just the way it works. Jeff Jarrett has his crew of guys and that’s completely understandable and it’s nothing against them or Jeff. There is only so much money and so many spots to go around and that money and those spots went to Jeff and his crew. That’s understandable. When I was brought in there was probably someone let go to make space for me to come in. At some point down the road those people will probably be let go to make room for somebody else to come in. That’s just the way it works. I’ve dealt with it my entire career.