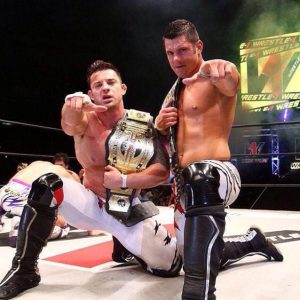 We have some surprising news, so lets not delay and lets hop in.

Top Worker Done with GFW – In a rather shocking move, Davey Richards has left Global Force Wrestling, citing his desire to work on his medical degree. Davey posted a classy departure message on Twitter. This seemed to be in the work since Slammiversary, as Angelina Love was not retained, and Davey Richards (spoilers) was eliminated very early in the Super X Cup. Davey was considered to be a top talent in the company, so his departure certainly hurts. However, his departure also opens up the way for Eli Drake to be the next new World Champion, as Richards was Eli’s only real competition.

Thank you to everyone @IMPACTWRESTLING !! Keep watching every Thursday night @PopTV !! pic.twitter.com/9EppwS9Hjj

More GFW Roster News – Jeff Jarrett promised a roster overhaul and we’re getting it. Joining Magnus and Madison Rayne on the formerly employed, Brandi Rhodes is now no longer officially with the company. Which isn’t surprising, as she was only signed to entice her husband Cody Rhodes to join as well. It’s also being reported that due to scheduling issues with when GFW tapes their shows, Matt Morgan has departed the company well. He spoke highly of the promotion, but stated his full time job was too important to leave, and that he couldn’t do both.

As far as additions go, The Irish Airborne (OI4K), will be joining GFW full time, and are in Nashville right now filming vignettes. And take it for what it’s worth, Konnan claims that Mascarita Dorada (WWE’s El Torito) has signed on with GFW too. This seems to indicate a desire by GFW’s Mexican partners wanting their mini’s featured to some degree.

Why was Phill so Quiet? – Last night’s Philadelphia crowd was considerably quiet throughout the show, but the worse part was certainly the main event that saw an almost dead crowd throughout the Punjabi Prison match. On site reports claim that the match was barely visible through the cage, and that despite Khali’s return to the company, no one popped for him due to their dissatisfaction with the match. It was also reported that fans were leaving in mass during the main event.

Quick Hits – Johnny Mundo will be in the next Sharknado film. Abyss is designing a new mask. Shane Helms was backstage at a RAW event in North Carolina.