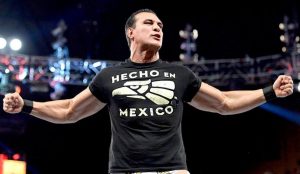 Alberto El Patron Update – Pro Wrestling Sheet reports that Alberto El Patron is no longer being investigated by police over a domestic incident at an Orlando airport between Patron and Paige. The Orlando Police Department confirmed that since the investigation found that Paige is the one who should be charged with domestic violence, Patron isn’t a suspect. Police believe that Paige should be charged with battery and the State Attorney’s Office is looking over the case before making a final decision.

El Patron had been suspended indefinitely by GFW after the ordeal was revealed to the public. There’s no word yet on if the suspension will now be lifted.

Nikki Bella Update – During a SDCC, Nikki Bella announced that John Cena and herself have set a wedding date but she did not divulge to the crowd when that was. She also revealed that her neck is injured due to it not fusing properly and is waiting for it to heal; she hopes to get back in the ring soon.

We here at NerdCorp hope the best for a speedy return for Nikki Bella.

Darren Young Update – Darren Young took to Twitter to post that he finished his last day of physical rehab. This also comes after the news that he should be expected to be cleared to return to the ring next month.