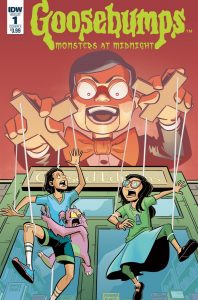 We had so much relevant wrestling news, and now, so little on the comic side of things. Ugh.

New Goosebumbs Series Coming for IDW – R.L. Stines’s literary universe is coming to IDW’s comics, with Jeremy Lambert writing and Chris Fenoglio handling the illustrations. The first set of stories will be titled “Monsters at Midnight”. Here’s the synopsis for the first episode, expected out in October.

Mia and Ginny were planning on spending a thoroughly dull summer at Grandma’s house with nothing but mothballs to entertain them. Enter a spooky, old bookshop and a door left slightly ajar, and soon these sisters find themselves trapped in a Horrorland drastically different from the sleepy, suburban town they left behind.

WildStorm Mini Series Coming – Despite the WildStorm series having a finite amount of issues, there is a new series spinning out of it in the form of “Wildstorm: Michael Cray”. The character known as Deathblow will be written by Bryan Hill (with contributions by Warren Ellis) and illustrated by N. Steven Harris and Dexter Vines.

Here’s the press release for the new series; 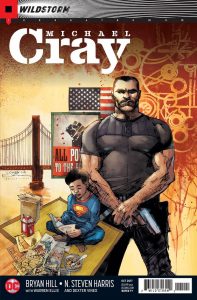 Warren Ellis’ critically acclaimed relaunch of WildStorm gets its first solo spinoff series! Michael Cray, professional assassin, has been betrayed by International Operations and has an alien life-form in his head that’s either killing him, transforming him, or both. The only thing that can bring sense to his life is for him to do what he does best: kill the wrong people for the right reasons. But Michael needs support and resources to hit back against I.O., and he gets them in exchange for working with Trelane, taking out her targets, his way. First up? A sociopathic silicon-valley billionaire by the name of Oliver Queen!

Did you notice the name at the bottom? Looks like Wildstorm is crossing over with the DC universe.

Fullmetal Alchemist – A new trailer for Fullmetal Alchemist has dropped online and in it we see the introduction of supporting characters Winry Rockbell to Roy Mustang to the homunculi Lust, Envy and Gluttony. Who these people are is a mystery to me, as I know more Latin than I do Japanese anime. But I’m told these characters are relevant, so check them out below.

Quick Hits – Wally West seen in Crimson Flash suit on the set for the premiere episode of season four. The Thinker will be joined by a female henchmen known as The Mechanic and apparently the Elongated Man will join the cast as well.