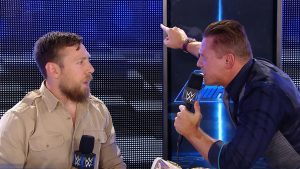 It’s been a long day, so enjoy this extra large order of news!

NOAH Stars to IMPACT – We talked last night that NOAH would more than likely send their GHC Tag Team Champions Naomichi Marufuji and Maybach Taniguchi, however there seems to be a slight change. While Naomichi will be heading over his tag team partner will not be, but another GHC Tag Team Champion will. The Light Heavyweight GHC Tag Team Champion, Taiji Ishimuri will cross weight classes and tag with fellow tag team champ, Naomichi to compete in the Slammiversary XV Fatal Four Way Tag Team Match on Sunday. They’ll join AAA/Lucha Underground stars Drago and El Hijo del Fantasma (King Cuerno), and LAX(c) in the match. There’s still a fourth slot, which I’m predicting to go to the Mumbai Cats.

NASHVILLE – GFW/IMPACT Wrestling, a subsidiary of Anthem Sports & Entertainment Corp., announced today that it will bring two superstars from Tokyo-based Pro Wrestling NOAH to participate in Slammiversary 15 on July 2, a live pay-per-view filmed in The Impact Zone on the backlot at Universal Studios Florida.

Naomichi Marufuji and Taiji Ishimori will team up to battle for the GFW/IMPACT Tag-Team Championship belts, now held by the Latin American Xchange (LAX).

El Hijo del Fantasma and Drago, two stars from Lucha Libre AAA in Mexico, also will compete in the 4-way match for the GFW/IMPACT Wrestling Tag-Team Championship. The final participants in the championship match will be Garza Jr., and Laredo Kid, representing Mexico-based The Crash.

Ishimori holds the distinction of being the longest-reigning GHC Junior Heavyweight Champion for Pro Wrestling NOAH. He has been wrestling professionally since 2002, is one of the best high-flying wrestlers, and has been a singles and tag-team champion.

“It’s an honor to welcome Marufuji and Ishimori to The Impact Zone. I know the fans will be awestruck with what these two can do inside the six-sided ring,” said Jeff Jarrett, who is the founder of GFW/IMPACT Wrestling and now serves as the company’s Chief Creative Officer.

“Bringing Marufuji and Ishimori to Slammiversary is just the next step in this long-term relationship with unlimited potential between GFW/Impact Wrestling and Pro Wrestling NOAH,” said Scott D’Amore, Vice-President of International Relations for GFW/IMPACT Wrestling. “I’m confident that the two companies will have a wide-ranging talent-exchange, and the ultimate goal is co-branded shows with GFW/Impact Wrestling and Pro Wrestling NOAH.”

The Miz on LaVar Ball Segment – Train wreck is a term we don’t use too often here; but that’s what this segment was. A train wreck. The Miz spoke in a Singapore press conference interview and revealed his thoughts on the segment and LaVar Ball, saying;

Bram Update – Bram’s in Italy right now, recovering from an in ring injury that was described as severe. He posted today via his Instagram account, saying;

Hey everybody…. cheers for the messages, I’ve an hour of wifi before am cut off from the world again! just so you know I’ve been in hospital in Italy the last three days! Am fine.. pulling out the catheter was the worst part .. there just keeping me in to keep an eye on me… Theres no wifi so I couldn’t let anyone know. Am here for another two days am told till they let me go… I can’t wrestle or do anything for two weeks or so apparently. so any shows am booked on or people who bought tickets am super sorry! Once I get back to the UK I’ll reach out appropriately!
Shout out to mags for spreading the word and Eddie Edwards for my dip and McDonald’s, which I ate even though I was told not too, and one of my nurses for stealing me extra biscuits

Tyson Kidd Returns – Tyson Kidd has returned to the WWE after over a year on the sidelines due to breaking his neck in a match that Samoa Joe wrestled in. Joe caused the injuries, that resulted in Kidd nearly dying. Kidd’s in ring career is assumed to be done, and will be working backstage on SmackDown as he’ll participate in Total Divas and work as a producer for the matches on SmackDown.

Quick Hits – Kurt Angle confirms on Twitter he’s the pre-order bonus for WWE2k18. Paige, Renee young, and Eva Marie are out of ‘Total Diva’s, being replaced by Alexa Bliss, Carmella and Nia Jax. AJ Styles is expected to win 4th of July battle royal to face Kevin Owens for the U.S. title at Battleground. Pentagon Dark was robbed at gun point in Mexico.