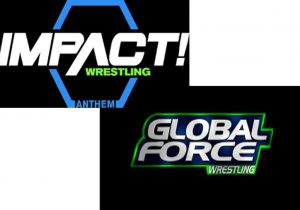 The headlines may not seem that impressive, but trust me, Anthem acquiring Global Force is just the beginning ground work. I deep dive into why below. Also, don’t forget, WrestleCorp is on tonight at 9 p.m. EST on mixlr.com/NerdCorp.

Impact Wrestling Acquires GFW – Huh? If this is the WWE, the announcement of an acquisition of a pro wrestling company would make total sense. However, the WWE doesn’t own other promotions. Vince McMahon doesn’t quietly own PROGRESS. Jeff Jarrett owns Global Force. It kind of feels like…’why?’.

However, keep this in mind, Anthem owns Impact, Jarrett owns GFW. Just because Jarrett runs one and owns another doesn’t make this at all news worthy. What now comes out of this is that Anthem, who owns fight network, can basically do whatever they want with the GFW and it’s, admittedly smaller tape library. Whether this leads to a second show, a second brand, or just those unreleased GFW episodes coming to light will remain to be seen.

I heard through the grapevine that part of Jarrett’s contract and position within Impact was going to be GFW’s purchase by Anthem, so it seems like that rumor had some merit. It should also be noted that Jarrett now holds an official position within the Anthem Wrestling Exhibition’s as a member of it’s board, and Chief Creative Officer, as well as an equity owner.

Now Anthem technically owns two wrestling companies. You can very much believe they’ll be seeking to acquire more video tape libraries, possibly from Scott D’Amore and others, as they seek to expand their Impact Wrestling video-on-demand service. With a board within Anthem making up just the wrestling-aspect, they are deffinitely not done expanding. Anthem’s goal for Impact is to be a true player and this is the first sign of that happening.

It should also be noted that our report on Impact debuting new titles has been confirmed in the press release.

Jeff Jarrett, the founder of both IMPACT Wrestling and Global Force Entertainment, will join Anthem Wrestling Exhibitions as a member of its board of managers, equity owner and Chief Creative Officer.

“We are thrilled to be joining forces with Anthem as a partner to build the business,” said Karen Jarrett. “This partnership will be complementary of our strengths and bolster our capabilities to grow the IMPACT Wrestling brand. Ed Nordholm as President and Jeff Jarrett as Chief Creative Officer make a great tag team”

“We are excited by the progress we have made with IMPACT Wrestling since acquiring the business in January,” said Ed Nordholm, president of Anthem Wrestling Exhibitions. “Jeff and his team have been instrumental in this success and we are pleased that we have reached an agreement on the basis of which we can combine our businesses to continue to grow. Slammiversary XV will be a fitting occasion to bring the promotions together and merge the titles under the new IMPACT combined belts. By combining our resources and talent, we can produce the best product for our global audience.”

IMPACT Wrestling is one of the world’s largest wrestling entertainment properties, creating more than 200 hours of original content annually across television and other digital platforms. IMPACT Wrestling specializes in events, products, merchandise and music, as well as the management and promotion of professional wrestlers. The roster features such greats as Bobby Lashley, Alberto El Patron, EC3, Eddie Edwards, Davey Richards, James Storm, Low-Ki and the high-flying X-Division, plus the lovely and lethal Knockouts, including Gail Kim. Its highly successful flagship, IMPACT WRESTLING, broadcasts in more than 120 countries around the world, including Thursdays at 8 p.m. ET/PT on Pop (a joint venture of CBS Corporation and Lionsgate) in the United States, Fight Network and GameTV in Canada, Sony Six in India, Spike UK in the United Kingdom and SuperSport in Africa.

Anthem Sports & Entertainment Corp. is a global sports media company with offices and studios in New York, Toronto, and Los Angeles. Anthem’s portfolio includes Fight Network, the world’s premier combat sports channel now broadcasting in the U.S., Canada and over 30 other countries, GameTV, featuring game shows, reality series, movies and sports available in over 9 million homes, IMPACT Wrestling, a professional wrestling promotion seen in 120 countries specializing in television programs, events, products, merchandise, music, as well as the management and promotion of professional wrestlers, and Edge Sport, an extreme and action sports network recently launched in Canada in partnership with IMG. Anthem also has a significant ownership interest in Pursuit Channel, one of the top outdoor channels in the U.S. available in 45 million homes.

Scott Steiner Rips HHH – Scott Steiner hates Triple H. Hated him since they were both in their primes. It’s pretty epic, and it’s not that surprising that Steiner is cutting on Triple H for, what seems to be, no real reason. When asked about why the WWE is struggling, Steiner said;

Yeah, the first few changes they need to get rid of Stephanie McMahon and Hunter McMahon. Cause they’re two idiots that are running the whole place up there. It’s like, I mean, I feel sorry for the wrestlers up there, they gotta follow the instructions of these two idiots that clearly don’t know what they’re doing.

…People don’t wanna watch it because the ratings are down and the reason why I call Hunter McMahon is because she obviously wears the pants. He’s a ball-less walking around human being.

When asked if he’d go into the WWE Hall of Fame, Steiner said;

Moose on Dixie Carter and Jeff Jarrett – People are skeptical about Dixie Carter and want to work with Jeff Jarrett. These are just truths about their reputations. Impact Grand Champion Moose spoke to the Sporting News and revealed he loves working for Jarrett, saying;

I love being part of Impact Wrestling and especially love that Jeff Jarrett is back with the company. He’s our leader. It’s awesome because he’s the one who started the company and he’s the one who made the company great. I think we went into a slump when he left it. He’s going to bring us back to where we were when he was there.

I think the biggest thing is just knowing that there’s somebody in the office that actually knows what they’re doing. Dixie was a great person but I think her only flaw was that she didn’t know much about wrestling. The product actually showed. But I think it’s great now that we have Jeff who knows about wrestling and was brought up in the wrestling business and he’s leading us.

SmackDown Live Ratings – SmackDown saw a bit of a ratings boost with the Money in the Bank reboot. While the show was lame, the ratings were slightly up, with a slight increase to about 2.603 million viewers. It’s barely up from the week prior.

Quick Hitters – Kenny Omega wants NJPW to double the size of the venue for their next trip stateside. WWE apparently films vignette with child actor portraying a young Bray Wyatt for unknown reasons. Jerry Lawler reveals that his WrestleMania 27 match with Michael Cole netted him his single biggest payday of his career for one match; totaling $130,000. Former WWE and IMPACT star, Victoria wasn’t allowed backstage after SmackDown to congratulate the WWE’s female competitors.