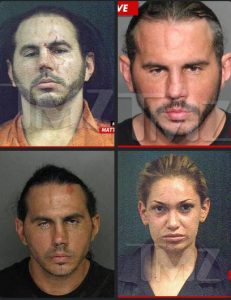 Hey, if Reby Sky likes posting personal shit, why not hop in and follow suit! How is everyone? Just a reminder, today is the NBA Draft and tomorrow we’re broadcasting live on Twitch at Twitch.com/RealNerdCorp. But don’t forget, tonight is ComicCorp! Tune in for that!

Mauro Back – So Mauro Ranallo is back in the WWE. Dave Meltzer speculated back when this whole thing started, that he’d more than likely be back and here he is. The thing is though is he won’t be on RAW or SmackDown, keeping him away from JBL by putting Mauro on NXT. He’ll return this Friday at the NXT tapings in Orlando.

Reby Sky Gets Personal – Reby Sky just hates everyone who won’t agree with her blind rage. Today she allegedly “revealed” court records that show Jeff Jarrett was arrested last year for a DUI. Though anything she posts should be considered iffy at best. So who knows if it’s even true. This was all in regard to Jeff Jarrett said he was taking the ‘high road’ in dealing with Reby Sky and the Hardy’s over the Broken Gimmick. Jeff declines to insult Reby, and she replies by trying to ruin his reputation. Yes, good job Reby, way to make Jarrett look like the sympathetic party. Also, every action she’s taking on Twitter constitutes to harassment, which will be super good for her come the trial.

You know, I think it was just timing. To me, I think timing has to be right and everything. I talked to people I was working with at the time, and they completely understood, where I stood, and they wished me luck. And they said, hopefully, if things don’t work out, we can do business in the future.

With me and Chris, I think it was more – we were kind of like brothers. Because we started at a time when no one knew who we were, so we basically had that bond where we had to stick together no matter what, and just make it work. So – just to get our name out there, and establish ourselves, because there were so many other stars that were coming to Impact Wrestling, and we didn’t want to lose our spot, so to say.

With me and Bobby, at the time, they didn’t know what to do with either one of us, because we’re both singles wrestlers. So they put us together. I think it was a more business thing – we were never really the greatest friends, but we had the camaraderie to make it work. Once we get to the building, we were professional, and we made everything work. Every now and then we’d go have beers together, celebrate and party.

So it was just one of those things where it was just two different tag teams, but at the same time, once we got to the building, it was on – we were connected, and we just worked off each other, and it worked.

I think it’s – as I talked about earlier, there were bumps on the road and this was one of those bumps on the road, but the company is going to keep moving forward. And now, with the new management and the overhaul of the company, all the guys in the locker room are excited. You have Jeff Jarrett coming back, who to me; I always thought Impact was the best when you had him, as one of the writers because he came from a wrestling family, and he knows wrestling.

He’s a guy who will get onto you. If you get out of line, he’s going to straighten you up and that’s what Impact needs too. Just because for so long, guys started doing whatever they wanted and wherever they wanted, and no one said anything to them. Jeff’s now, ‘No, you do it this way, plain and simple’. I always say that wrestling is kind of like a movie. I didn’t hire to be the writer, I was hired to be the actor. So I can’t go to the director and say, ‘No, I don’t want to die in this scene.’ You can’t do that. So that’s why he’d say, ‘You’re hired to play this character. Play it the best way you can.’

…A little fun fact – he’s one of the guys who helped train me at the very beginning, when I started training to be a wrestler. I trained out at his dad’s farm, in Hendersonville, Tennessee, under Jerry Jarrett and under this guy named Eddie Marlin, and this other guy named Wolfie D who was a part of the same PG – 13 at the time.