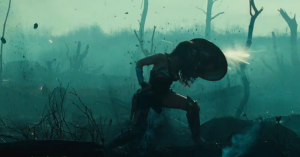 Wow, a lot of “Spider-Man” based news. And of course, turmoil in Disney. So lets not beat around the bush and just dive in.

‘Wonder Woman’s Real Pay – Yesterday a big report came out that claimed Henry Cavill out earned Gal Gadot from 14 million compared to 300k. That report has been debunked. The real story claims that Henry Cavil’s 14 million dollar figure was never confirmed and no source was given. This is being blamed on Buzzfeed for generating sex-bating articles to up their views. The new story points to Gadot’s contract being in line with previous top stars, like Chris Evan’s $300k, Robert Downey Jrs. $500k

A lot of the issue surrounds Lauren Duca, who you can find on Twitter here @laurenduca, for flat out lying about the information who many took as a reliable source due to her alleged “credibility”. The tweet has been deleted, and no apology or explanation has been issued for her erroneous tweet. This flub was so powerfully dumb, Buzzfeed even copped to spreading the misinformation. Buzzfeed, owned up to their mistakes. WHAT THE FUCK IS GOING ON! 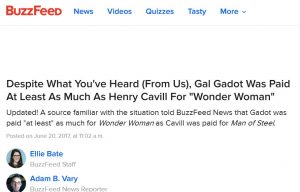 What a world we’re living in. It should be noted that to the best of our knowledge, Gal Gadot signed a three picture deal, so any further films will have a nice pay increase.

‘Spider-Man’ Spin Off’s? – According to a new report from The Hollywood Reporter, the next two films to be made into a film will be films centering around Kraven the Hunter and Mysterio. These two films will follow the “Venom” stand alone flick and the “Silver and Black” film, that will have Silver Sable and Black Cat team up.

‘Venoms’ Main Villain? – According to another report form The Hollywood Reporter, “Venom” will in fact feature Carnage as it’s main antagonist. Though, unlike knowing Tom Hardy is playing Eddie Brock/Venom, we have no idea who’s playing Cletus Kasady/Carnage. While there are several actors who want the role, you need the right character actor to bring him in. The character is ultra-violent, so the movie might need to be an R-Rating to properly do it.

Another Fantastic Four Coming? – Fox is at it again according to Bleeding Cool. The website is claiming that Seth Grahame-Smith is writing the new treatment to be seen through the eyes of the Fantastic Four children. Yup.

Sure. Ok. Whatever. Next!

Star Wars Drama? – Stop me if you heard this one before, but Star Wars have parted ways with their directors, Phil Lord and Chris Miller, due to creative differences for the upcoming “Star Wars: Han Solo” anthology film. Kathleen Kennedy said about their departure;

Phil Lord and Christopher Miller are talented filmmakers who have assembled an incredible cast and crew, but it’s become clear that we had different creative visions on this film, and we’ve decided to part ways. A new director will be announced soon.

The new rumor has former “Happy Day’s” star, Ron Howard, being the front runner to pick up the directing duties of the film.

Matt Reeves Has Interesting Idea for Batman – After Matt Reeves finishes up the last “Planet of the Apes” film (*for now*), he’ll start work on “The Batman”.

For me, point of view is really important. I want to make sure you are experiencing something from the perspective of the main character in the story. I’m a huge Hitchcock fan — I like the idea of being immersed in that perspective. Movies for me are about empathy. The idea is to make you, the audience, feel what the character — that you are not — feels. And so I really hope that will continue with Batman.

Halloween ComicFest Titles Revealed – The Halloween version of Free Comic Book Day has revealed their titles for this years event. On Saturday, October 28th, you can go to your local comic book shop and pick up 18 free, Halloween/spooky themed books.

(*Click this link for more details about the titles*)
This years full titles are: 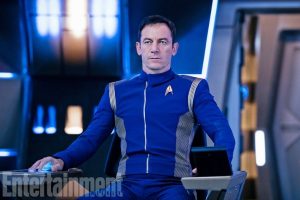