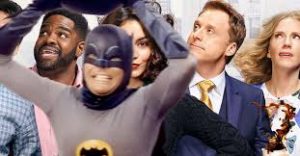 It’s Friday. Enjoy the fact that ‘Powerless’ released an unaired episode with Adam West in it. Watch it, down below. It’s beautiful.

Black Lighting Villain – Co-showrunners Salim Akil and Mara Brock Akil have revealed that “Black Lighting’s” villain will be Tobias Whale. Well, at least will be one of the antagonist. The duo claimed that that they won’t be doing the “villain-of-the-week” approach like “Flash”, and following more of “Arrow’s” approach.

It’s a character-driven show. I don’t know if there’s going to be a fight every week,

There’s certainly not going to be a villain of the week. I don’t want to do that. We really want to explore the characters, even the villains. I think one of the most interesting characters right now from a storytelling standpoint is Tobias. Because we’re not having him sort of twist his mustache. His hatred for himself and for others comes from a real place, so we want to know why he’s like that.

The rumors are true. The first cut was rated R by the MPAA, and the female stars’ cleavage was CGI’d away so as not to offend. But, you know, such is life.

He also revealed that a joke was cut due to it potentially referring to oral sex.

Supergirl Has Shakeup – Ali Adler has stepped down as a showrunnre for “Supergirl”. To replace her, the show has promoted Jessica Queller and Robert Rovner to replace her.

Adam West on Powerless – Despite the fact that “Powerless” was cancelled, NBC, DC Comics and Warner Bros. all came together today to release “Powerless” on DC Comics’ YouTube page. It’s a beautiful tribute to a beloved man. I haven’t seen it yet, but I’m going to be watching it in about eight minutes.