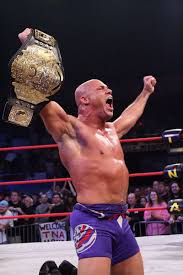 We’re an hour away from WrestleCorp! Come join us at mixlr.com/nerdcorp as we talk pro wrestling! If you missed the show, just check out the website for the links to it!

SmackDown’s Bad Ratings – “BUT THE N.BEE.AAAHHH!” you screamed on Tuesday. What’s your excuse today, WWE fan? WWE is losing it’s audience. Fans don’t want to believe, but it’s happening, in real time. In the span of months, not years. SmackDown has hit a shockingly low number for the year, at 2.027 million viewers for the episode. SmackDown generally does steady numbers and always has, so to see it teetering on the sub-2 level is not good at all. If your flagship show is averaging 2 million and your secondary show is averaging 1 million, you better believe that your contract with USA will be less and if it’s less, that means cuts and firings.

Kurt Angle’s Future Opponent – Dave Meltzer is reporting that Triple H will be Kurt Angle’s return opponent down the road. The idea would be that Stephanie and Trips have issues with Kurt Angle’s handling of RAW and HHH and Angle will battle due to it. It’ll probably be at Survivor Series or WrestleMania 34.

*Zhao Xia – The first Chinese woman to sign a developmental deal with WWE and was brought over as part of a group of Chinese trainees who have been working out in the WWE Performance Center. Xia has trained in martial arts and has had multiple first-place finishes in various martial arts and fitness competitions, including the Second World Traditional Chinese Wushu Championship, the Nike Challenge Competition and First China Throw Down: Battle on the Bund.

*Mary Kate- The former Rosie LottaLove in TNA, was originally trained at the Team 3D Academy, who completely remade herself on the independents and later toured in Japan.

*Danielle Kamela – Trained by Rikishi’s Knox Pro school in Arizona, Kamela was an on air personality for Fox Sports Arizona, an Arizona Cardinals cheerleader and a former member of the Phoenix Suns’ dance team before signing a WWE deal. She was in the top 30 finalists for the most recent version of Tough Enough as well.

*Julia Ho – Canadian model and MMA fighter, who trained with Brian Kendrick before being signed.

*Victoria Gonzales – The daughter of Rudy Boy Gonzales Gonzalez played basketball for two seasons at Texas A&M-Kingsville before transferring to Sam Houston State, redshirting one year and playing another before graduating in 2013. She was signed to a WWE developmental deal last year.

*Sarah Logan- The former Crazy Mary Dobson aka Sarah Bridges, who recently debuted under that name on WWE NXT TV.

*Taynara Melo – A black-belt judoka from Brazil who was signed last year.

Impact Wrestling Reveals Another Live Event – August 5th is no longer the first Impact Wrestling live event. While the show on the 5th is still set for the Richmond County Bank Ballpark, There will now be a shwo on the 4th as well, at the Sports Arena in St. James, New York. The show will feature Alberto El Patron, Lashley, Eddie Edwards, Allie, Eli Drake and EC3 for sure.

There are also rumors of a show being added on the 6th, in Connecticut.

Quick Hits – Former WrestleMania winner, (and woman beater) Floyd Mayweather will take on Conor McGregor in a boxing match. Taya Valkyrie and Johnny Mundo have officially gotten engaged according to their Instagram accounts. John Cena is lending his voice for the upcoming animated film “Ferdinand”. Buff Bagwell to begin retirement tour during his 28th anniversary in the ring.