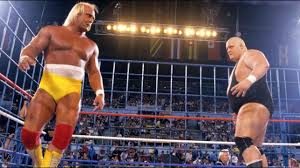 Good afternoon all. It’s been a long day and boy, how time flies. So sit back, strap in, and lets get to the wrestling news.

Hulk Hogan Returning? – After over two years of being gone from the WWE, Hulk Hogan may be on his way back to the company. There was apparently a poster in a WWE Kid’s magazine that ships overseas, and a lot of people believe that the ban on Hogan is officially lifted with this move. While a minor gesture, it’s an easy way to gauge fan reaction to the inclusion. If it’s bad, they claim it’s a mistake, apologize and move on. If it’s good, you start making plans for his return.

Daniels Talks Hogan’s Advice – Speaking of Hulk Hogan, ROH World Champion Christopher Daniels was interviewed by A Music Blog, Yeah? and revealed the advice Hulk Hogan once gave him during their time in Impact together;

I’m sort of proud of it, actually Hulk Hogan once told me – this was maybe four or five years ago – he told me that I should lie about my age. So, I started telling everyone I was seventy-five and that didn’t really work out. I feel like people that have watched me and know that I started in 1993, even if I was 18 when I started and you add 24 years to that, you know I’m getting up there and I wasn’t 18 when I started wrestling. So, I mean I’m sort of leaning into the idea of my age. I feel like I still performing at a top level and nobody has to slow down, so that I can keep up with them,

Top ROH Star to WWE – While we wait for Adam Cole to sign with the WWE, ROH or NJPW or Impact, another top name may be on his way to the WWE. According to some in the know, Dalton Castle has been sent feelers by the WWE to gauge his interest in joining the promotion. Castle is a great live event draw for the brand and WWE hopes to bolster it’s sagging NXT house show revenue with a star like Castle. Though, it’s unlikely he comes in with the same gimmick or even be allowed to use the same tactics, like The Boys.

Quick Hits – Brie Bella training for a comeback after giving birth. Vince McMahon may appear on Table for 3. Chris Adonis suffered a minor injury, no word on if it’ll hinder his Slammiversary match against Moose and DeAngelo Williams.